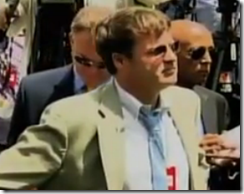 I generally do not write blogs specific to racial issues. I do not want what I write to be judged through a racial prism at all.

Neil Munro, a reporter from Tucker Carlson’s “The Daily Caller” heckled the president in the middle of his statement providing temporary relief for the “Dreamers”. He continued shouting even as the President warned him.

The disrespect that President Obama, a family man, a man that has treated all above and beyond with respect, has tolerated from those on the Right over the last three and half years is very reminiscent to what Jackie Robinson endured. This is 2012 folks.

Interesting enough I am not mad at the average working middle class person who has been led to believe that their problems are caused by those “others” taking more from society than they put in or those “others” that are taking away their offspring’s birthright. We all know who those “others” are, the blacks, the Mexicans, the Hispanics, the Haitians, the Jews, the non-white immigrants, and everyone that is coming to America to take and take and take.

Sadly, it is those that know the truth, those that have pilfered the middle class, our Plutocracy, our Oligarchs, our titans of finance, that are not only riling up the insecurities of the working middle class people, but they have a concerted effort to maintain our depression to attempt to remove this President for the fear that Obama, the populist becomes the modus operandi of his second term.

Make no mistake, these are all planned acts. The attempt is to get a negative reaction out of the President and his supporters to then create a carnal war among ethnicities with the expectation  that just this time we can squeak this Romney guy in to appoint a few Supreme Court Justices that will interpret the constitution under the framing of the Right Wing. But most importantly they want to create a fear that brings in a majority Republican government however small because the Ryan Budget can be passed with 51 votes in the senate and 50% + 1 in the House.

Democrats, Independents, and moral Republicans, saving this country will be a tough fight. Speak up, Speak out, Register to Vote, and VOTE!