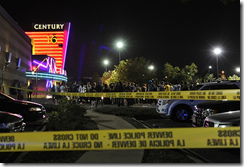 We must all express our most sincere condolences to those that were killed in Aurora Colorado. For most of us with young children that enjoy going to these events, the killings strike close to home. These types of events have occurred throughout the country.

Incidences like Aurora Colorado highlight our gun control problem and gets lots of coverage because it occurs where we think it shouldn’t. It suddenly makes a lot of us feel insecure. It is at a place we frequent.

That said if you think a bit deeper, we see that this is an ongoing problem nationally. It just does not get covered. In 2009 (last available completed year from the CDC) an average of 31 people were murdered with guns every day. 11,493 American citizens were killed with a gun in 2009. In the UK there were 39 murders by firearm in 2009. Canada had 144.

We do not know why the killer in Colorado did what he did. One thing we know is that many Americans are over armed as if they are in some constant state of danger. This is worrisome for several reasons. We have a lot of economic problems. These economic problems are falsely framed by many politicians and plutocrats.

Because of the false and biased information from our leaders, we have a very misinformed citizenry. These massacres will seem like child’s play if we do not soon get our house in order soon.

Two things can occur in our very well citizen armed country. If citizens realize that they were pilfered by a few and have no way out, they just may attack the pilferer. Alternatively, if the pilferers continue to successfully deflect blame to “others”, they may simply edge citizens into shooting each other, a civil war on false pretenses that they finance on both sides.

This story will die in a week. Let us hope we continue to work and ensure those that continue to die because of bad policies are eventually vindicated. Please like my Facebook page and follow my tweets for postings I do not put on our Coffee Party site for editorial reasons.

One of the injured was just 3 months old, hospital workers said.

The shooting unfolded inside a darkened theater packed with Batman fans, some in costume for the movie's premiere. Screaming, panicked moviegoers scrambled to escape from the black-clad gunman, who wore a gas mask and randomly shot as he walked up the theater's steps, witnesses said.

Shooting turns movie into surreal horror: 'This is real'

Police quickly arrested a man believed to be the shooter in a rear parking lot of the theater, Frank Fania, a police spokesman, told CNN.

"He did not resist. He did not put up a fight," Fania said. Police seized a rifle and a handgun from the suspect, and another gun was found in the theater, he said. It was unclear where law enforcement found a second handgun.

The suspect was tentatively scheduled to appear in a Colorado courtroom on Monday, although no formal charges have been filed, according to the Colorado Office of the State Court Administrator.