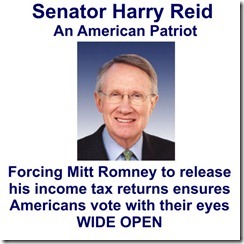 Republicans and Democrats are calling foul. They say that Senator Harry Reid stating that he was told by a Bain investor that Presidential candidate Mitt Romney had not paid any federal income taxes in ten years is unsubstantiated. Some Democrats are saying that Senator Reid should not have used his position to reveal that “information”. Republicans are actually calling Reid a liar, a word rarely used by politicians to describe another. The mainstream news media when reporting Reid’s statement make the point to stress that his comments are unsubstantiated.

My initial feeling was that Senator Reid should not have revealed what was told to him without further proof. Then after receiving a call from a government professor I started to have a mental conflict on whether he should have done it or not. I wrote about it here. On further reflection there is no more conflict in my mind. I have come to the conclusion that Senator Harry Reid is a patriot. I did a CNN iReport stating that and the comments started to fly.

In the last 30+ years the left has been at a disadvantage because while the Right has always been willing to make bold unsubstantiated statements, some that may have been true but most not, the left has always been science and evidence based. When Reagan made his bold statements on the economic policies, the then pragmatic Republican George HW Bush (who I voted for in 1988) called it voodoo economics and he was correct. The economic pseudo recovery under Reagan was deemed the success of trickle-down economics even though all the factors that led to the recovery were the Keynesian expansion of our economy (huge deficit spending, huge tax cuts, & increased government employment). Even as George W Bush cut taxes, increased entitlements, and fought unfunded wars creating structural deficits, we have allowed these problems to be characterized as a deficit exacerbated by the Obama administration and one that will require huge social safety net reductions, a fallacy.

While Republicans categorically stated that their policies would work unsubstantiated, Democrats and Liberals seem to be always waiting for data to substantiate. Moreover the media seem to expect more substantiation from the left than the right. How then could President Obama’s birthplace stay in the media as a serious story? How else could the characterization of Obamacare “killing your grandma” be taken seriously? How else could the Romney/Ryan budget be accepted as a viable budget when it fails the simple test of basic arithmetic?

The reason Mitt Romney and the Republicans are scrambling as Senator Harry Reid is clamping down on his statement is twofold. It is likely true. If it is not accurate, it is likely better than the reality given the propensity of Mitt Romney to push the envelope to avoid taxes and American regulations. There is no other reason to keep American corporations and bank accounts overseas.

Mitt Romney wants to be our President. If elected, he is the executor of the laws of this country. While as an executive of Bain capital he used the laws to minimize his financial & regulatory responsibility to our country, as president he must enforce the law to the benefit of all US citizens. I believe his belief in a brand of capitalism in which workers are a disposable commodity makes him unfit to be president.

Mitt Romney’s tax returns will complete the picture of much of what we already know of this man. Senator Harry Reid has decided to throw himself on the sword for this one. If he is correct it will be a rubber sword. If he is incorrect it is at worst a flesh wound. What I am absolutely ready to state is that Harry Reid is a patriot for ensuring that Americans will know enough about Mitt Romney and vote with their eyes wide open. He is doing his part.