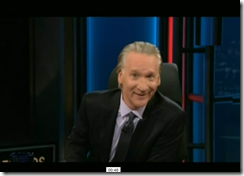 Last week I was railing against the mainstream media for not doing its job in actually analyzing the information from all political candidates and parties above and beyond the spin they provide. Comedians and satirists like Bill Maher and Jon Stewart are being taken more seriously on issues that matter than many of our seasoned mainstream media broadcasters.

I watched both Meet The Press as well as This Week and was completely disappointed in its content. Unfortunately both of these programs that purport to be substantive would leave the ill-informed more confused. The reason is that they allowed each side to spin as opposed to being the respected arbitrator that could call out the verifiable twisting of facts or outright lies.

I’ve been convinced for a long time that the hands of our media are tied and that they are unable to be the unbiased dispensers of factual information to the citizenry. We are left with satirists and comedians like Bill Maher to break down issues into bite sizes for consumption for many that have tire of being spun.

These comedians and satirists will likely continue to get airtime as long as their penetration into the American psyche remains manageably small. I watch Politically Incorrect last night and simply enjoyed Bill Maher’s take the Voter ID regulations being imposed by Republicans to suppress the vote. I condensed it into ninety seconds. It says it all. Tell me what you think.

Remember you must now be the media. Get informed, share what you have learned, and most importantly vote.