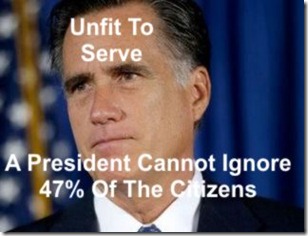 Mitt Romney’s statement caught on a secret video tape where he disparages the 47% of Americans that do not pay income taxes makes him unfit for the presidency for several reasons. Sadly many Right Wing conservatives consider his statement a fighting call. They believe that somehow the 47% are takers that do not contribute to society. Sadly Mitt Romney has a math problem in his choice to disparage those 47% just as he has a math problem with his own budget.

Mitt Romney’s statement has a political problem and a moral problem. His failure to realize this will likely be fatal for his presidential prospect.

Politically he should note that while many of the conservative Right Wing elite have made it vogue to disparage those that do not pay federal income taxes, Mitt Romney adopting that narrative leaves him open for defeat when many real journalists and bloggers finally show that a large percentage of those 47% are actually reliable Romney supporters that do not know their own financial situation. Again, Mitt Romney’s math problem in not understanding percentages, in not understanding that that percentage is not a monolith of non-support. Republicans have been playing a damaging game that continuously convinces many poor and middle class Americans to vote against their own interests. This was covered in the book “What’s the Matter with Kansas?: How Conservatives Won the Heart of America”.

Mitt Romney should be careful. Most American are hard working and DO NOT want a handout. Most Americans are simply seeking equal access to success. Most Americans would love to make enough to pay federal income taxes and not have to be disparaged by someone who was given a running start.

While Mitt Romney looks down at these folks for not being able to pay federal income taxes he should note that he has never created anything of societal value. He made his own wealth by loading companies up with debt and extracting wealth. These companies were created with the intellect, the minds, the intelligence, and the innovation of others. In other words, Mitt Romney by definition is no more than a parasite as he lives solely on the achievements of others. He takes away. He pilfers. He outsources jobs. He makes the masses poor then he disparages them when they do not make a living wage that affords them the ability to pay federal income taxes specifically because of policies that Romney’s ideology dictates. This may sound harsh, but is it any different than his disparaging the poor and middle class even as his type of policies are causal? 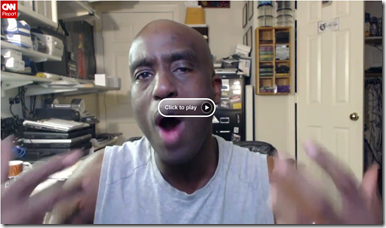 Please check out my iReport and join the fray. This is not a statement that should be taken in jest. His thoughts come from an ideology that materially affects every poor and middle class American. He represents an ideology that is destroying the fabric of America.