I am still riled up about the debate. I really have mixed feelings on President Obama’s performance and passivity. I racked my brain last night and came up with what I believe is the only plausible answer as we know our president knows the material inside out and he knows the severe flaws of Mitt Romney, his hypocrisy, insincerity, and lack of empathy. I wrote the piece “President Obama’s Fear of the Angry Black Man Label Loses the Debate On Style But Wins On Facts”

Now folks, the president need surrogates. He needs folks who work on the personal level with people where the unrelenting corporate dispersal of misinformation can be mitigated. If you really want a democracy you have to fight for it. The Plutocracy does not just wither away, it requires that the middle class reclaim it and take it. 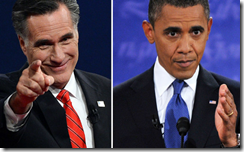 The first debate between President Barack Obama and Republican challenger Mitt Romney Wednesday night had some Democrats wondering, "What happened to my president?" while GOP supporters reveled in their candidate’s performance.

By most accounts Romney was the clear winner, while Obama, known for his oratory skills, came across as lethargic and unengaged. According to a CNN/ORC International survey conducted right after the debate, 67% of debate watchers questioned said that the Republican nominee won the faceoff.

“This was not the Obama I expected to see. What should have been a robust debate quickly devolved into a shellacking by Gov. Romney,” wrote iReporter RandiJo of Kent, Washington. “Romney appeared dominant and aggressive while Obama kept his head bowed and looked like a kid being scolded by his school teacher. Obama had no FIGHT in him tonight. Before the next debate I suggest Obama call up Honey Boo Boo to ask if he can borrow some of her "go-go juice".

That was the general consensus among voters who shared their views with iReport. 1drvpr, echoing others, felt Obama "let down a lot of people," while Sahit Muja said Romney "destroyed Obama point for point."

"I was looking forward to this for so long. I had no idea that this would be so good," said "Every single time [Romney] was asked a question, he didn’t pause. He blurted it out like he was supposed to. He was just strong. It’s not that he won; it’s more that Obama lost."

Likewise, Republican Elizabeth Lauten,  a volunteer on the Romney campaign, was cheering. “Mitt Romney really  brought his A-game and out-debated the President all night long even  though Obama had nearly four and a half minutes more speaking time," she  said. "Romney showed the country he’s not only ready to be President,  but he’s ready to clean up Obama’s mistakes. I can’t wait to see what  the next debate brings!"

Democrat David P. Kronmiller, a Democrat in Burbank, California, who voted for Obama in 2008, said he could think of just “one really good moment” from the president, "when he talked about his grandmother and how she raised him.” The Burbank, California, voter said he was surprised Obama didn’t take on Romney more forcefully “for wanting to raise taxes on lower income families and lower middle-class families, which is what Mitt Romney’s [tax] plan basically does."

That said, Romney’s performance was not without criticism. cancan2012 suggested the governor came on too strong and "dismissed every fact about what he has said on the campaign trail and denied ever saying it." Egberto Willies conceded Romney may have won the debate "in style and preparation," but worries that voters will take "the statements without facts that he continued to make and assume he was knowledgeable on issues, or that he would be better for the middle class."