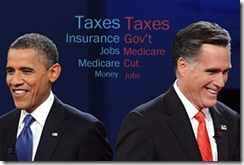 The problem is that Romney was at the other side of his prose. Sadly Romney has no record as President. Romney also knew that most Americans are not fact checkers and that after absorbing the debate most people simply go on their way.

The President also knows that and seemed to have taken a gamble. His gamble was that attacking Mitt Romney on his verifiable lies and change of positions would be interpreted as un-presidential or the emergence of the Angry Black Man. You see, the President is between a rock and a hard place.

The media is mostly interpreting Mitt Romney’s rude behavior towards the moderator as well as his interruption of the President as being aggressive, assertive, and in command. President Obama did not take the chance of the media interpreting his behavior especially since the past is prologue.

I do not think any of that is true. The President is very intelligent, articulate, and in command of the entire subject. I think he understood that Romney as the underdog would get soft media coverage on his lies and misinformation. If he brought up the 47% or Bain Capital the media as they have on other occasions would have characterized that as un-presidential and subjects that should have been left to the campaign ads. Had the President displayed any anger, resolve, or assertiveness, that display would have been characterized as the emergence of the Angry Black Man.

Civility is a difficult. Civility can sometimes be interpreted as weakness. The President’s justifiable distrust of the carnal minds of many that can be triggered by what most thoughtful people know as “The Angry Black Man Syndrome” failed the president as he articulated much truth. To maintain civility from a rabid display of misinformation, the president chose to ignore it. Next time he must trust that in these difficult times Americans want a fighter and as such it is incumbent upon him to find a better balance than he did in this debate.