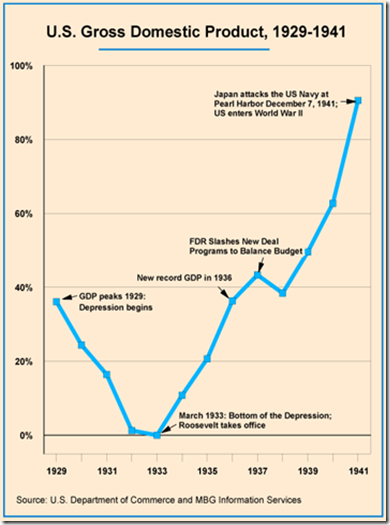 The debate last night showed the stark differences in the policies of both campaigns. After reading the transcripts every unbiased person will come to the conclusion that Vice President Biden was substantive and that Paul Ryan was a parrot of talking points. That said both candidates knew all the relevant foreign policy issues and they all presented their economic ideology however empty of details.

This post is a different one that I felt compelled to write because we are at the end stage of a campaign where America must really decide on the direction this country will be following not only for the next 4 years, but as far as the eyes can see given that the next President will likely appoint 2 or 3 supreme court judges and change economic policy to bring us to fiscal sanity.

Fiscal sanity will come about. The issue is whether it will be done on the backs of those in the middle class or by making those who for years have benefitted the most from the work and sweat of the middle class pay their fair share. There is nothing new about this debate. After the depression in 1929 Keynesian economic policies started to bring us out of the Depression and just like now, Republicans damaged the recovery in 1937 by forcing the cuts in New Deal programs. Not until World War II, a stimulus on steroids, did the economy recover.

The bottom line is the Romney/Ryan ticket by their policies show complete disregard for the middle class in particular and the country in general. Their policies are borderless. After all, Mitt Romney uses tax policies to keep his money out of our country, the country he claims to love where it would be better served invested in American jobs assuming it is true that the wealthy (the plutocrats) are job creators.

Voting does matter. This election more so than most will determine if America will continue the pilfering of the middle class by transferring their wealth to the top 1% as the rest scramble to get ahead.

Please read Paul Krugman’s two articles below. They are important and should give much of this post context.

PS: I found the chart above several years ago in a post at Daily KOS when I was doing some research on the Depression. I found it during the stimulus debate when the president was getting attacked. It had seemed to me that CNN was buying in to the Right Wing fallacies so I tweeted them a blog post I made with the chart of what happened in 1937. I got a call from a producer who asked me about the chart. He did not want to use it because he was not sure of the data. I went to the government website and pulled down an Excel table with the GDP data and plotted it. In less than half hour one of the anchors used the information. I add this little addendum to tell all of you out there that we are all responsible for fighting misinformation and ignorance when we discover it and we must get it out in whatever form we have available.

The IMF and the GOP

Econowonks are still buzzing about the new IMF World Economic Outlook, which offered grim warnings about the world economy, and also argued forcefully if discreetly that a big reason for the worsening outlook is that policy makers have gotten the basic economics wrong.

Of particular interest is the discussion in Chapter 1 (pdf) on fiscal multipliers. I and others have been arguing for a while that the experience of austerity in the eurozone clearly suggests pretty big Keynesian effects. Here, for example, is what a scatterplot of fiscal consolidation (from the IMF Fiscal Monitor) and growth (including an estimate for next year, from the World Economic Outlook) looks like: 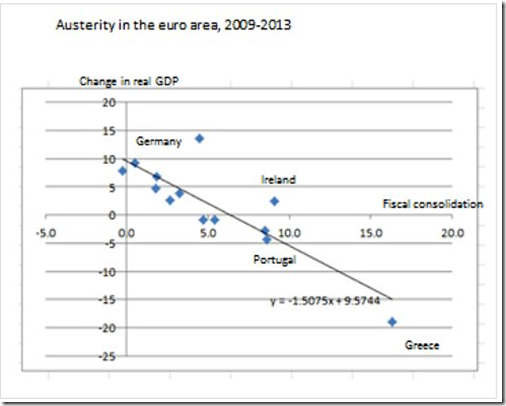 But, you might object, maybe the causation runs the other way; maybe countries in trouble are forced into fiscal consolidation, so it’s not the austerity what did it. But the IMF has an answer to that: it looks at forecast errors versus austerity. Part of the reason for doing this is to figure out why things are going so much worse than expected; but there’s also the fact that the forecasts already included the known problems of the economies in question, so that you’re more or less getting an estimate of the impact of austerity over and above the known problems (and the initially assumed effect of austerity, which was supposed to be small). It looks like this:

Back in 2009, when there was (briefly) a policy consensus in favor of active fiscal policy to fight the slump, there were many warnings to the effect that we must not repeat the infamous mistake of 1937, in which FDR was persuaded to focus on balancing the budget while the economy was still weak, terminating the recovery from 1933 and sending America into the second leg of the Great Depression.

And what policy makers proceeded to do was, of course, to repeat the mistake of 1937.

The new IMF World Economic Outlook is, in effect, an extensively documented exercise in hand-wringing over the consequences of this repeat of bad history. Kudos to the Fund for having the courage to say this, which means bucking some powerful players as well as admitting that its own analysis was flawed.

There is, however, one point I think is getting skewed in the discussion of the IMF’s new concern over premature austerity. Much of the discussion seems to focus on the question of relaxing the demands on debtor countries — which is certainly a crucial issue for the eurozone. However, the global 1937 we’re now experiencing isn’t just about forced austerity in Spain, Greece, etc.. It’s also — and I think mainly — about unforced austerity in countries that remain able to borrow very cheaply.

Let’s look at estimates of the cyclically adjusted budget deficit from the IMF’s Fiscal Monitor, measured as a percentage of potential GDP. I don’t think you want to take these numbers as gospel — for Britain, at least, there’s a very good case that the IMF is greatly understating potential output and hence overstating the structural deficit, and I suspect that this is true to a lesser extent for the US. But in any case the point is that even cheap-money countries facing no pressure either from the market or from external forces to engage in immediate austerity are nonetheless engaged in sharp fiscal contraction: