The election is over and by a 3% margin Americans have decided to reelect President Obama. I will be the first to say that I believe President Obama governed like a centrist Republican in his first term. I think he did that to ensure a second term.

­­­ After-all the President’s stimulus was heavy on tax cuts, Republican candy that has a lower effective multiplicative effect to stimulate the economy. His signature healthcare bill The Affordable Care Act lovingly called Obamacare maintained the inefficiencies of having private for profit insurance companies that transfer middle class wealth via healthcare premiums to the mostly wealthy shareholders of the insurance companies. In every policy or bill he passed he compromised to appease Republicans for which he got no buy in from them.

My hope is that in his second term he will mobilize America to allow his inner most liberal to raise its head. Conservative supply side economics has decimated the middle class for 30+ years as the wealthy have morphed into an effective plutocracy.

It is time for the wealthy to thank the middle class and give its Right Wing puppets the authority to work with the president to increase their taxes for the better good of the country and to ease the pain on the middle class they have provably pilfered since the institution of Reagan’s supply side economics. They used our government to create policies that placed most of the middle class in peril. These are not just empty words but facts that are reflected in the charts that illustrate the income and wealth disparity in America. 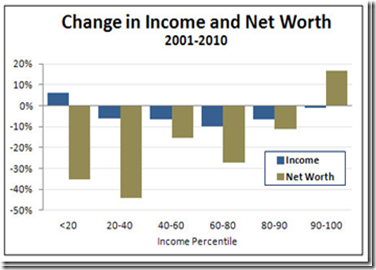 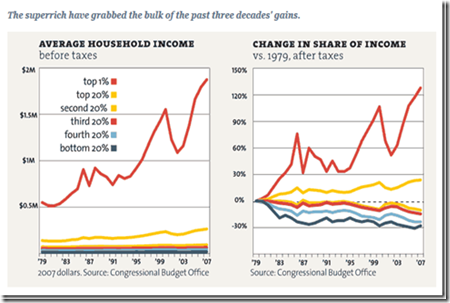 This is not sustainable. This is immoral. This will change either peacefully or by force when the population realizes they have no further recourse and have been had by a few deceitful titans of finance led politicians.

Politicians must begin by passing legislation to ensure that the policies which currently are effectively legalized theft are dismantled and corrective recovery of the pilfered occurs. Before any discussion on the reduction of the safety net occurs it must be ensured that all income is treated at least equally.

Passive income should actually carry higher tax rates than the income from somebody who goes to work every day. In other words capital gains from stocks or the appreciation of any asset should have no preferential tax treatment from someone who works. It is the only way that we can ensure that either the working person has unmitigated access to real wealth.

Legislation that makes it easy for ALL workers to unionize is essential. Businesses all have unions in the Chamber of Commerce and the dozens of other trade organizations that lobby on their behalf. The individual worker has no wage recourse by themselves and said disadvantage is evident with their wage decline as unions have declined.

We must not be fooled by the catered and tested messages to misinform the citizens to vote against their own interest. The same middle class decimating policies is what the GOP is attempting to maintain even though most Americans are clamoring for the ability to succeed.

It is important that we stand up once and for all for middle class policies. We are the job creators. We are the brains. We are the intellect. We are the creators of products. We are the providers of services. Those that move capital are just movers of capital. They have no other inherent value to society and as such a system that gives them more worth must be dismantled. That starts with the middle class taking back their government and dictating policy that rewards those that really produce.