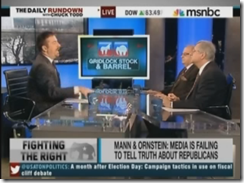 The mainstream press is starting to listen. Its fear of irrelevancy was evident in a nine minute segment on MSNBC’s The Daily Run Down where Chuck Todd interviewed Thomas Mann and Norman Ornstein on media reaction to their book “It’s Even Worse Than It Looks: How the American Constitutional System Collided With the New Politics of Extremism” and subsequent Washington Post essay “Let’s just say it: The Republicans are the problem”.

This segment demanded a post mortem. It shows that the mainstream press is actively engaged with what is occurring in the alternate media, but seem unwilling or unable to correct their modus operandi.

The introduction to the segment is fascinating. Chuck Todd relays the premise of Mann and Ornstein’s argument with a sarcastic caveat where he implies that their ostracism from the mainstream media was imagined. Their appearance on The Daily Run Down is likely the outcome of the impact the virality of their piece had on the Internet.

Later in the interview Chuck Todd tries to defend the ineptitude of the mainstream media implying that balanced coverage was based on the party really believing the tenets it was espousing.

His defense is a factually inaccurate characterization of how the press has been covering Republicans. One need only revisit the Healthcare debate. Much of the bill, (mandates, private insurance, etc.) was a product of the conservative think tank “The Heritage Foundation”, yet Republicans opposed the bill on grounds they once stood for.

Whether a party believes and is convicted to a particular position should be immaterial to the press. If its policies are not fact based, or does not confirm to reality, or historical data, that must be reported.

The press has allowed the Republican message stating that the wealthy are job creators to be placed into the public domain unchallenged, yet as the wealthy has gotten wealthier proportional job growth has lagged. When wealthy entrepreneur Nick Hanauer gave a TED Talk about the middle class being the real job creators, it was not released because TED claimed it was too partisan. Pressure from the Internet eventually forced its release.

In the clip below Norman Ornstein hits it on the nail. The press simply needs to tell the truth, not be spun, and expose the lies and inconsistencies. Most importantly do not be forced to accept false equivalencies.

Immediately after Ornstein talks about false equivalences, Chuck Todd shows that he still does not get why the mainstream press is held in disrepute. He immediately tries to link the past Democratic intransigence with the debt ceiling debate, with the economically damaging one perpetrated by the Republicans in 2011.

Chuck Todd’s comment in the closing portion of the segment says it all. He shows that the mainstream press is fearful that activists both on the left and the right are making them irrelevant.