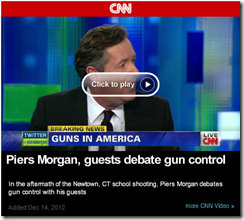 Most people are tired of the NRA and gun lobby continuing to spin misinformation to justify America’s most immoral gun policies. It is as if the facts no longer matter. It is as if visual and physical evidence of the carnage left by the liberal availability of guns do not matter.

When countries like Nicaragua, Zimbabwe, & Serbia have a lower gun related death rate than America, one should know that there is a major problem. When our murder rate by guns is looked at in raw numbers, it is equivalent to over 25 murders per day.

The United States is the most armed nation on the planet with approximately 89 guns per hundred people. Yemen is a distant 2nd. One must ask if that level of gun ownership given the constructs of our society is justified. One must ask if the easy availability of guns along with a depressed economy is a powder keg ready to explode.

Piers Morgan confronted vocal pro-gun advocates on his show on Friday. The mainstream media has been negligent in its coverage of many issues, generally allowing it to be spun by political operatives and corporate lobbyists. One can only hope that corporate powers will allow the news bureaus within their networks to do their jobs, report the news, and provide unbiased research. A functioning democracy requires no less.