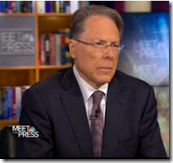 The National Rifle Association’s Executive Vice President Wayne LaPierre appeared on Meet The Press with David Gregory. LaPierre maintained the same belligerent behavior that he showed when he gave the speech disguised as a press conference on Friday.

It was evident that Mr. LaPierre came on the show to deliver a message and not to answer questions. David Gregory and Wayne LaPierre talked passed each other for most of the interview.

The following exchange was classic:

GREGORY:This is a matter of logic, Mr. LaPierre, because anybody watching this is going to say ‘hey wait a minute. I just heard Mr. LaPierre say that the standard is we should try anything that might reduce the violence. And you’re telling me that it’s not a matter of common sense that if you don’t have an ability to shoot off 30 rounds without reloading, that just possibly you could reduce the loss of life? Would Adam Lanza have been able to shoot as many kids if he didn’t have as much ammunition?’

LAPIERRE: I don’t buy your argument for a minute.

It is evident that the NRA is on a mission. They know very well that they are under scrutiny. After-all, even the New York post came out against them with phrases like “GUN NUT” and “NRA in bizarre rant over Newtown”.

To believe that Wayne LaPierre, his organizations, and consultants did not understand how this speech would be characterized shows a level of unidirectional thinking that have allowed well-crafted messages to become a part of a new narrative. The NRA is at its most hated moment with the killing of some of America’s most precious, young innocent children.

The fact Mr. LaPierre continued his trek on NBC with the same tonality after the press he got from the mainstream media proves that this is a well-orchestrated effort. The NRA knows that anything it says now will be listened to by the largest audience it has ever had. While everyone is now scared of the possibility of this random act occurring in any community, he introduces a solution favorable to his lobbying activities that will be given plausibility when the anxiety over this traumatic event subsides.

Mr. LaPierre will continue to repeat the same idiocies. He will do so because ultimately he knows the mainstream press will eventually tire or give his repetitive statements plausibility. That is how the Right has function successfully for years and it has paid dividends. After-all, they allowed voodoo economics to be relabeled with a more palatable name, supply side economics. This flawed economic policy has decimated the middle class. LaPierre will likely be just as successful in reframing what really ills the country. He will make the solution to our gun problems more guns. If past is prologue, he will succeed.