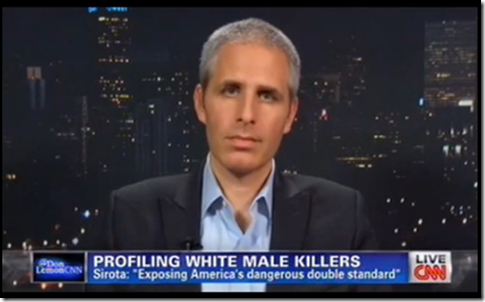 David Sirota appeared on the “Up with Chris Hayes” and made a very interesting observation. He said that because most mass shootings in America come at the hand of white men profiling would not be an option.

See the video snippet below.

David Sirota wrote a piece for Salon titled “Time to profile white men?” after the vitriolic response he received from the Right Wing media. In that piece he states a prescient fact.

Let’s review: Any honest observer should be able to admit that if the gunmen in these mass shootings mostly had, say, Muslim names or were mostly, say, African-American men, the country right now wouldn’t be confused about the causes of the violence, and wouldn’t be asking broad questions. There would probably be few queries or calls for reflection, and mostly definitive declarations blaming the bloodshed squarely on Islamic fundamentalism or black nationalism, respectively. Additionally, we would almost certainly hear demands that the government intensify the extant profiling systems already aimed at those groups.

Yet, because the the perpetrators in question in these shootings are white men and not ethnic or religious minorities, nobody is talking about demographic profiling them as a group. The discussion, instead, revolves around everything from gun control, to mental health services, to violence in entertainment — everything, that is, except trying to understanding why the composite of these killers is so similar across so many different massacres. This, even though there are plenty of reasons for that topic to be at least a part of the conversation.

David Sirota later appeared on a CNN panel speaking to Don Lemon discussing the Connecticut Elementary School Shootings. He continued to force the exploration of the conversation in a nuanced manner. He said.

"I think we should ask the question why is America 30 percent white guys, and 70 percent of the shootings in the last many decades have been at the hands of white guys ... I do think it's interesting to note that had 70 percent of mass shooters been let's say Arab or African-American men, I think the conversation would be ... much uglier."

"And I think that it's good we're having a nuanced conversation about all sorts of things -- mental illness, gun control -- but I hope that the next time something bad happens, and unfortunately there will be a next time, that if it's not a white guy, that we remember that we shouldn't ascribe to entire groups the actions, the bad actions of individuals. Because we're not doing that right now, and I'm not saying that we should, but I think we should remember that the reason we're not, is because it's a form of white privilege."

See the video below.

While these shootings are not about race, many times there is a dynamic that ultimately brings race in to the equation. The reality is that because the perpetrators of this type of crime are usually white males, the honest discussion that covers mental health, gun control, or even the feelings of being oppressed whether real or imaginary can be examined. Unfortunately, had the perpetrators been Black, Hispanic, Muslim, or some other, this same discussion would likely not have been had.

Those who believe race should not have entered the conversation are wrong. This presents the perfect time to raise the issue because if an incident like this occurs again, but instead with a non-white perpetrator, the groundwork would have been laid to minimize the stereotyping of the violent act.