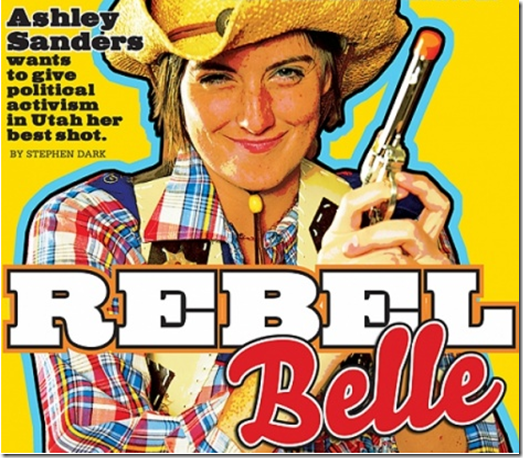 I was just doing my morning Googleing of two organizations I am a part of, Coffee Party USA and Move To Amend. I do this to watch our performance in the social media sphere and to monitor any misinformation of these organizations that may be out there. This morning I came across this gem on Move To Amend Executive Committee member Ashley Sanders.

I was with Ashley and the rest of the Move To Amend executive committee at a planning retreat in Tampa Florida last week. All of us can state categorically that her zeal for social change is stronger now than ever. She was instrumental in providing ideas going forward.

The article below is a very complete piece that shows the caliber of folks working on amending the constitution to remove corporate personhood and to codify that money is not speech. It capture’s Ashley’s complexities and indirectly illustrated why she is passionate about restoring (or creating) our democracy.

The article on Ashley is an excellent read. When finished reading the article check out the performance of her group of Salt Lake City Move To Amend activists performing the “Bread & Circus” skit. It is both very entertaining and informative. Most importantly please sign the Move To Amend petition here. Help us restore a real democracy.

As several young men push a big-wheeled circus wagon up the driveway of a small house in South Salt Lake, smiles and applause break out among the gathered political activists. They hurry to open its two shutters. Slogans are painted on each one: “Corporations are not people,” reads one, “Money is not speech” the other. 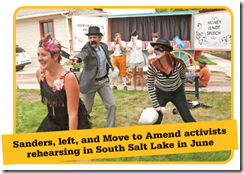 A passing skateboarder gliding down the street with a friend that early June 2012 evening is unimpressed. “That’s hideous,” he shouts with a sneer.

In a frilly, black flapper outfit, Ashley Sanders smiles tolerantly at the naysayers as they roll by. She and the dozen activists-cum-performers, members of Move to Amend, are premiering a 15-minute mix of skits and puppetry that night at a block party in the Granary District in Salt Lake City. Move To Amend’s national signature campaign, she explains, has two goals: “Pass an amendment to the Constitution that corporations are not people, that money is not speech, and create a democracy movement in the United States.” The street-theater production, where activists play corporate villains, a vain politician and unctuous lobbyists, is Sanders’ brainchild, and despite the chaotic comings and goings of the group, she is very much in charge.

“When she has a vision, she gets people involved and makes sure you’re staying on track,” says Occupy Salt Lake’s Seth Neily, dressed in a Tweedledum-style pair of orange and red trousers.

But even 30-year-old Sanders’ steely will and organizational skills cannot forestall the wagon, pulled by three activists riding bicycles, from breaking down just two blocks from the house where they were rehearsing. As the male performers lift up the wagon and work on the broken axle, Sanders, driving a large SUV, watches at the corner, gritting her teeth. “Fun times,” she says, as her fellow activists gingerly pull the repaired wagon along the streets.

Sanders is one of a small group of “rising lights” from Salt Lake City—others include the co-founders of Peaceful Uprising, Tim De Christopher and Ashley Anderson, and its national organizer, Henia Belalia—who have achieved prominence among those driving social change nationally, says David Cobb, 2004 Green Party U.S. presidential candidate and Move to Amend national spokesman. If the 1960s protest movement was activism 1.0 and the 1980s Anti-Apartheid Movement activism 2.0, then Sanders, he says, represents activism 3.0, “the post-modern, engaged citizen activist.”