America’s safety net, specifically Medicare is continuously under attack. Many politicians claim that its growth rate makes the budget deficit untenable lest there be substantial changes; in other words, draconian cuts.

An article in the Business Insider  by Joe Weisenthal is dispelling that myth. He states

The conventional wisdom on the deficit is: Right now the deficit doesn’t pose a problem, but thanks to the gigantic growth in healthcare costs, it’s inevitable that the government will get swamped by Medicare spending, ergo we need to tweak the system.

Peter Orszag, who was the head of the Office of Management and Budget under Obama, and who is now at Citi, offers up a chart that could be a Medicare costs game-changer. 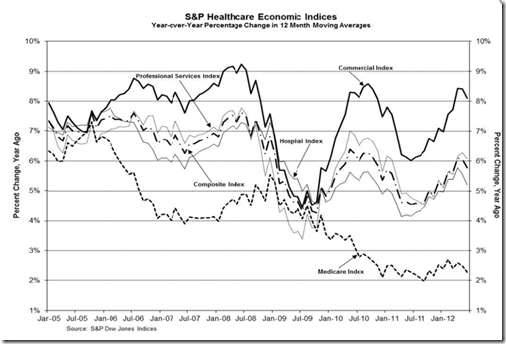 “This graph from S&P illustrates two key facts: health-care costs have decelerated over the past few years, and Medicare costs have decelerated more than other health costs. That pattern suggests at least part of the slowdown is structural (since if it were all just a reflection of economic weakness, we wouldn’t expect Medicare to slow down more than other health costs, but if it were partly structural, that’s exactly what we would expect). If this slower growth continues, the impact on our long-term fiscal gap will be much more meaningful than any plausible outcome of the fiscal cliff negotiations.”

The purveyors of misinformation have cost this country billions if not trillions of dollars. This is a direct transfer of wealth from the middle class to the owners of private insurance companies for paying a medical bill. It is the immorality of health insurance.

While the above chart is not intended to be a debate piece between single payer healthcare (Medicare for all) and private insurance, one can infer which is more efficient.