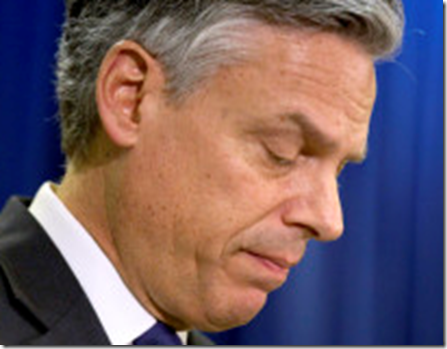 Jon Huntsman and Republicans that are brave enough to speak the truth about the degeneracy of the current Republican Party presents the only future for the Party. By speaking out in the short term they hurt their own political prospects. In the long term they give themselves and their party future viability.

Former Utah Gov. Jon Huntsman (R), who ran for the Republican presidential nomination in 2012, had harsh words for his party in an interview published Sunday in Britain's Daily Telegraph.

"The party right now is a holding company that's devoid of a soul and it will be filled up with ideas over time and leaders will take their proper place," he said.

"We can't be known as a party that's fear-based and doesn't believe in math," he added. "In the end it will come down to a party that believes in opportunity for all our people, economic competitiveness and a strong dose of libertarianism."

Hunstman, who dropped out of the Republican race after coming in third in the New Hampshire primary, has criticized the rightward tilt of the party. In a recent interview with The Huffington Post, he took issue with the obstructionist policies of the GOP, describing them as "thwart the opposition, stymie the opposition, obfuscate, be a flamethrower, go out there and destroy the system, and here we are."

"In my party, compromise cannot be seen as analogous to treason, which it has been recently," he said.