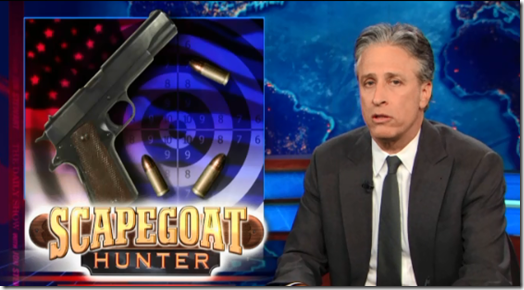 Jon Stewart in his very funny manner encapsulates the absurdity of the gun control debate. That the  Sandy Hook Elementary School Massacre is unable to have all parties sit back and have a sensible conversation on how to remove the most dangerous guns from our midst is not only absurd but sad. It speaks about the shallowness of many in our culture.

We have a Right Wing that is using their vast media networks to scare a sect in America into frenzy. They have these people believing that the government is out to get them. They have them believing that those “other people” are takers that are taking away their birthrights. And how do you protect against that? You get armed with those assault weapons.

An over armed America is an America that will use those arms and reality bears that out. Until we stop allowing false equivalencies in our discourse we are doomed to repeat the same massacres over and over.

Jon’s funny monologue has a serious message. Let’s have a real discourse. And for those caricatures he shows exposing their idiocy throughout the Right Wing echo chamber, SHUT UP, you are the problem.