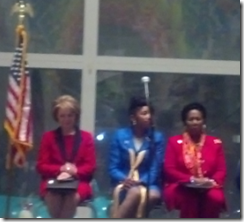 Congresswoman Sheila Jackson Lee was in Houston on January 15th, 2013 to swear in Diane Trautman and Erica Lee-Carter as Harris County School Board Of Education Trustees. Erica Lee-Carter is Congresswoman Lee’s daughter. These two women won two very hard fought campaigns for a little know position that helps thousands of students throughout the county.

Diane Trautman, a hard working and persistent  server of the community will be an asset to the school board. She will provide that steady intellect that will be needed to provide new innovative services to our students in the county.

From the time I met Erica Lee, I saw an independence and eloquence beyond her years. I interviewed her at the Trayvon Martin rally. She was well aware of current events and their socio-economic impact not only on the local level but the national level. Suffice it to say that being  the daughter of Congresswoman Sheila Jackson Lee dictates a certain level of accomplishment inherently.

The video captures snippets of Diane Trautman and Erica Lee’s swear in as well as the beginning of Congresswoman Lee’s speech. The end of Lee’s speech however is much more telling. It was as if she was willing Americans locally and nationally to work together for the common good.

I have known Congresswoman Lee for several years. I spoke to her and interviewed her at length at the Democratic Convention in 2012. I saw then as I saw at this function why she perennially gets re-elected. She is very in tuned with her constituency as she tries to build bridges in her special manner.