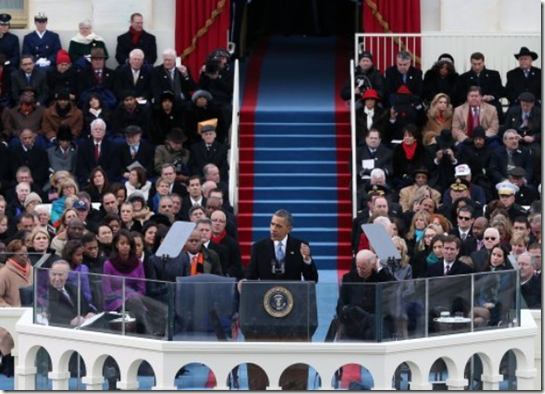 President Obama gave one of the most progressive speeches I have heard in my lifetime. As I was listening to the speech I tweeted the following.

Prez is hitting the fallacies of GOP with a passion with words while conciliatory are stinging.

While I always believed that President Obama’s inner Liberal would come out in the second term, I did not expect it to be as obvious as it was in his speech. His intellect has always dictated that he takes a Liberal/Progressive stance, yet he has never been able to govern in that manner mostly because of the intransigence of his own Democratic Party. While it is true that the Republican Party was and is completely obstructionist, an honest assessment of the failures to get healthcare policy, banking policy, and others as efficiently or effectively as they should have been, rest squarely on Democrats in the first two years of his administration. After-all, it is true that they had a filibuster proof majority.

If one doubts whether this was a Liberal/Progressive framework, one just needs to read the following excerpts.

Together, we determined that a modern economy requires railroads and highways to speed travel and commerce, schools and colleges to train our workers.

In other words, Americans collectively build its physical and human infrastructure in order to enable a successful economy. We should never be dependent on toll roads, private schools, etc.

Together, we discovered that a free market only thrives when there are rules to ensure competition and fair play.

Strong regulations should be effected as opposed to laissez faire capitalism to ensure equal access for all in the free market.

Together, we resolved that a great nation must care for the vulnerable, and protect its people from life’s worst hazards and misfortune.

A real humane society takes care of its weakest or those that are at most risk. In other words, a humane nation has a strong social safety net (strong Social Security, Medicare, Medicaid, & Obamacare).

He puts it all together in a few sentences later with the following.

No single person can train all the math and science teachers we’ll need to equip our children for the future, or build the roads and networks and research labs that will bring new jobs and businesses to our shores. Now, more than ever, we must do these things together, as one nation and one people.

The president effectively reminds the populace why a Liberal stance was required in the first place with the following paragraph.

But we reject the belief that America must choose between caring for the generation that built this country and investing in the generation that will build its future. For we remember the lessons of our past, when twilight years were spent in poverty and parents of a child with a disability had nowhere to turn.

The coup de grâce came with this paragraph deep in his speech.