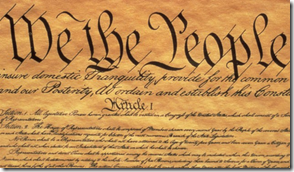 Corporations, like people, have a constitutional right to spend money on U.S. elections. That’s what the U.S. Supreme Court decided in Citizens United v. Federal Election Commission in 2010.

Once the court ruled, the only way to make it illegal for corporations to spend that money would have been to change the Constitution and spell out that corporations were not people.

But amending the Constitution is a notoriously arduous process that can take decades.

On Tuesday, Move to Amend, a coalition of hundreds of organizations and tens of thousands of individuals "committed to ending corporate rule," according to its website, moved to get the ball rolling.

Its first step was to introduce its We the People Amendment in Congress. The amendment aims to abolish all corporate constitutional rights and establish that "money is not speech."

Rep. Rick Nolan, D-Minn., the lead sponsor of the bill supporting the amendment, is working with Move to Amend and said the need for change regarding campaign finance laws "has never been more apparent.

"We are in a constant state of paralysis," said Nolan, and Congress needs to do something about "corporations who have come to dominate the political process.

Nolan’s proposal calls on the U.S. Constitution to "unequivocally state that inalienable rights belong to human beings only, and that money is not a form of protected free speech under the First Amendment and can be regulated in political campaigns."

The Preamble to the US Constitution starts with the phrase "We The People" and shows only some of the writing from the upper left hand corner of the document of the Constitution.

The constitutional amendments Nolan proposes to abolish include the First, Fourth, Fifth and 14th, all of which contain language that accords "corporations … this right" of free speech.

According to the Center for Responsive Politics, an estimated $6 billion was spent during the 2012 election season. That figure, which is the highest in American history, trumped the second most expensive election, which reportedly spent $700,000.

The Move to Amend coalition, which has grown to nearly 260,000 people, has helped to pass nearly 500 resolutions in municipalities and local governments across the country since its establishment in 2009.