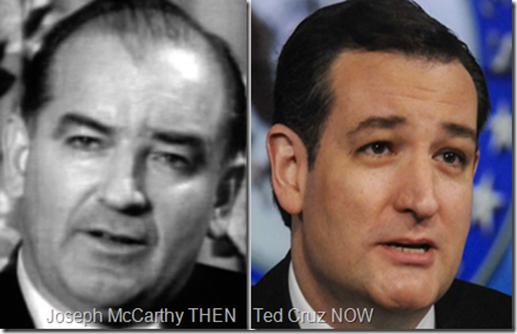 America has been watching in shock as the saying “the more things change, the more they stay the same” is materializing before ones eyes. Texas Senator Ted Cruz has morphed into Joe McCarthy. Anyone watching the manner he presented leading questions to Defense Secretary nominee Chuck Hagel would have thought Cruz to be an understudy of Joe McCarthy, likely to have watched his every machination in Congress.

Senator McCain publicly rebuked Senator Cruz. McCain’s rebuke made it on every national broadcast. According to the New York Times

Senator Lindsey Graham, Republican of South Carolina, said that some of the demands Mr. Cruz made of Mr. Hagel were “out of bounds, quite frankly.” Senator John McCain, Republican of Arizona, issued a public rebuke after Mr. Cruz suggested, with no evidence, that Mr. Hagel had accepted honorariums from North Korea.

“All I can say is that the appropriate way to treat Senator Hagel is to be as tough as you want to be, but don’t be disrespectful or malign his character,” Mr. McCain said in an interview.

“He basically came out and made the accusation about money from North Korea or money from our enemies, and he just laid out there all of this accusatory verbiage without a shred of evidence,” said Senator Claire McCaskill, Democrat of Missouri. “In this country we had a terrible experience with innuendo and inference when Joe McCarthy hung out in the United States Senate, and I just think we have to be more careful.”

McCarthy-like attacks by Ted Cruz on the opposition has been standard for some time. The New Yorker reports

Two and a half years ago, Cruz gave a stem-winder of a speech at a Fourth of July weekend political rally in Austin, Texas, in which he accused the Harvard Law School of harboring a dozen Communists on its faculty when he studied there. Cruz attended Harvard Law School from 1992 until 1995. …

He then went on to assert that Obama, who attended Harvard Law School four years ahead of him, “would have made a perfect president of Harvard Law School.” The reason, said Cruz, was that, “There were fewer declared Republicans in the faculty when we were there than Communists! There was one Republican. But there were twelve who would say they were Marxists who believed in the Communists overthrowing the United States government.”

Cruz is an intelligent man. There is a method to and a reason for this type of behavior. His reason is to get notoriety. His method has proven to get attention. He should however remember that all those that have practiced his form of attack, have ultimately failed both politically and personally. He does not need to look as far back as McCarthy. He simply need to revisit all the Republicans that attacked President Clinton. Their own misdeeds were uncovered. While President Clinton was left with a reputation of a flawed but decent human being doing positive things for the world, their political life is non-existent and they are all considered hacks now by most.

Many will view the young freshman senator, including many in his own party as pushing the limits. His escalation is simply an outgrowth of a behavior openly promoted by the party. Sarah Palin as a vice-presidential candidate was just as caustic and partisan as she levied accusations. The establishment did nothing to reign her in. The GOP  Chairman Reince Priebus continues unfounded attacks and lies on the administration policies with the intent of misleading all. While Ted Cruz is the new McCarthy, his teachers were all the prominent leaders in his party.