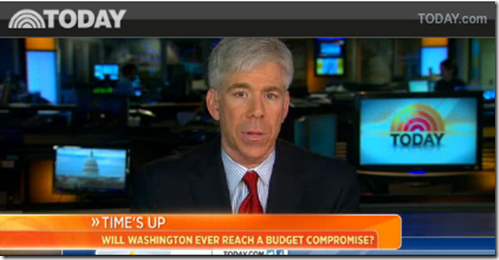 For too long many have allowed the Right Wing Echo Chamber that includes Rush Limbaugh, the talking heads at Fox News, and others to lay the false foundation that the media was somehow a shill for President Obama and his administration. It is unlikely that the Obama administration ever thought that.

NBC’s David Gregory throughout the President’s administration have allowed John McCain, John Boehner, Paul Ryan, and other Republicans to come on his show and make false assertions that went unchallenged. Paul Ryan was never challenged for his budget that provably ballooned the budget. Last week David Gregory had a few minutes of good journalism when he compared the ideology effected failure of Louisiana at all social and educational levels relative to Massachusetts. Of course his panel went back to corporatist shills that would have the president compromise the American social safety net.

In yet another slip of honesty, David Gregory said the following on NBC’s Today on Friday.

"The President does not particularly like the Washington press corps," Gregory said. "And I think that feeling is mutual in a lot of respects. And so there’s not a great relationship between that Washington establishment and the President."

So much for the Liberal press given the President beneficial coverage. No wonder the president continues to go around these journalists that believe they are entitled to first dibs on the administration’s message