The Strip | By Brian McFadden 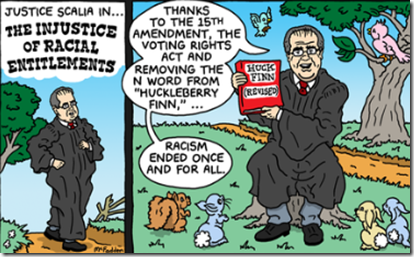 Here was Justice Scalia’s diatribe during the Voting Right's Act case at the Supreme Court.

Well, maybe it was making that judgment, Mr. Verrilli. But that’s — that’s a problem that I have. This Court doesn’t like to get involved in — in racial questions such as this one. It’s something that can be left — left to Congress.

The problem here, however, is suggested by the comment I made earlier, that the initial enactment of this legislation in a — in a time when the need for it was so much more abundantly clear was — in the Senate, there — it was double-digits against it. And that was only a 5-year term.

Then, it is reenacted 5 years later, again for a 5-year term. Double-digits against it in the Senate. Then it was reenacted for 7 years. Single digits against it. Then enacted for 25 years, 8 Senate votes against it. And this last enactment, not a single vote in the Senate against it. And the House is pretty much the same. Now, I don’t think that’s attributable to the fact that it is so much clearer now that we need this. I think it is attributable, very likely attributable, to a phenomenon that is called perpetuation of racial entitlement. It’s been written about. Whenever a society adopts racial entitlements, it is very difficult to get out of them through the normal political processes.

I don’t think there is anything to be gained by any Senator to vote against continuation of this act. And I am fairly confident it will be reenacted in perpetuity unless — unless a court can say it does not comport with the Constitution. You have to show, when you are treating different States differently, that there’s a good reason for it.

That’s the — that’s the concern that those of us who — who have some questions about this statute have. It’s — it’s a concern that this is not the kind of a question you can leave to Congress. There are certain districts in the House that are black districts by law just about now. And even the Virginia Senators, they have no interest in voting against this. The State government is not their government, and they are going to lose — they are going to lose votes if they do not reenact the Voting Rights Act.

Even the name of it is wonderful: The Voting Rights"

It makes one wonder if Scalia would rather return to the 1950s as opposed to launching to a fair future.