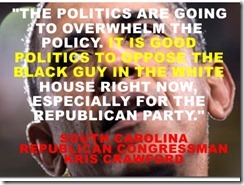 I posted one of my blog posts to our Coffee Party Facebook page today titled “Republican: ‘Good Politics To Oppose The Black Guy’ While Country Suffers”. The piece references a Huffington Post article I found that referenced a January interview done by South Carolina State Representative Kris Crawford.

Crawford stated that unlike many of his fellow Republicans, he supported the measure to expand Medicaid eligibility under the Affordable Care Act (Obamacare).  He however predicted that he would be the dissenting voice in his party. He suggested that his Republican colleagues knew they benefitted from opposing President Obama’s policies specifically because of his race.  Crawford stated

I wrote the piece because I strongly believe that Crawford did America a service. He said what many knew but refused to say for the fear of being accused of playing the race card. Ultimately, Crawford like the rest of his Republican colleagues, voted against humane aid to the needy in their state.

The post led to a vibrant discussion on Facebook and very well written blog by Eric Byler below. We had a minor dustup on our Facebook page over comments by a South Carolina State Representative Kris Crawford (R), who complained earlier this year that, "It is good politics to oppose the black guy in the White House right now," and, over the decision of Egberto Willies, who is African American and Latino, to share these comments on our Facebook page.A lot of people jumped down Rep. Crawford's throat, assuming that he was gloating about something that he was actually criticizing. Others attacked Egberto for quoting Crawford's words and then pivoting to make his own argument. "Why do you have to bring up the issue of race?" is a common complaint from our more conservative Facebook commenters.

I understand the frustration of conservatives who often feel — and often are — attacked as "racists" when the issues of race and politics intersect, which is often. Our arguments against backward economic policies and institutionalized racism need to go much deeper than name-calling if we wish them to have merit, and, they need to resist name-calling if we wish them to be received with open minds.

However, I commented on the page that:

I think that we all have to acknowledge a truth that is painfully obvious to people of color in America, especially African Americans and Latinos. America has suffered from the tradition of exploiting racism for political purposes. The result has been bad policy, and, bad relationships between races. Heavily financed exploitation of racial anxiety by political parties and media outlets that support political parties has prolonged racial division in America much longer than it would otherwise have lasted.
How does it work? It simply takes advantage of a vulnerability all human beings have. We are afraid of people who are different, and, sadly, we are prone to believe stereotypes and lies about people who are different if those lies are told to us by people who are "the same."
That is why it may have been good politics, in the short term, to make so many false claims about President Obama, and about the majority of Americans who voted for him in the past two elections, and about Blacks and Latinos as a proxy target for simple anxiety over demographic shift.