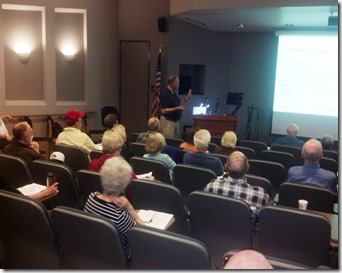 I was honored to be invited by Curt Gibby to speak at the “Third Saturday Seminar 2012-2013, Return of the Elders, Unleash your Wisdom”, a group that meets monthly to discuss our current politics. Before speaking, Curt had a well prepared PowerPoint of all the major local, national, and international events of interest. I was amazed and impressed at the amount of work that went into preparing for this monthly forum. Inasmuch as I am a news junkie, I found myself engulfed not only in the preparation of the topics but in how he brought the material to the group. 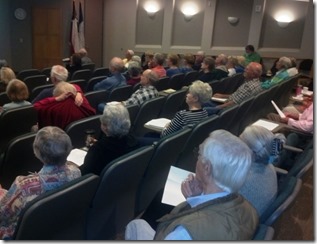 What was great to see was the group’s interaction with Curt and with each other on the different political issues. The group did not show political homogeneity. Inasmuch as that was the case, the discussions were always civil. Most importantly the entire audience showed a political knowledge that I wish was more representative of America at large.

I was happy to see a few of our local Woodlands Coffee Party cohorts (Merry & Virginia) present. I was shocked. In fact I told Merry it seems like Texas activists cannot get away from each other. We crossed paths at Occupy Houston, March For Women, Planned Parenthood, Single Payer Healthcare, and many other events both in Houston and Austin. 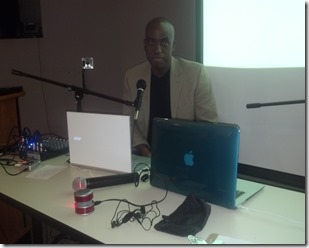 When I got up to start my portion of the program I had to ask the audience “Where the hell have you guys been?” It was just refreshing to talk to such an engaged audience. When I got there I realized I did not save the last part of my PowerPoint presentation and had to rush to add a couple pages. What is interesting is giving this audience, the PowerPoint presentation was just decoration. Instead of a long drawn out talk, it turned into a very constructive dialog with thinking people with many different ideologies.

I was most impressed when I found common ground with a multimillionaire in the audience who realized that the subject was not an attack on him or his morals but on a system that allows the hoarding of capital. The intent of activists like many in the room is not to bring equal outcomes but equal access to success. I introduced the group to the new Coffee Party 535 Campaign and the Move to Amend WE THE PEOPLE AMENDMENT. 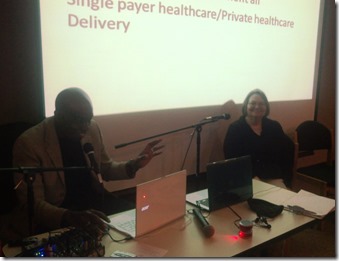 After the talk I did my weekly Coffee Party Show “Politics Done Right” in the same auditorium. A few people stayed for the two hour radio show. I met two of my listeners, Charlie Lindahl and Bruce Barnes for the first time. Charlie saved the day by lending me his portable speaker that allowed everyone to hear those that were calling into the show. Absent that I would have had to magically play traffic cop and repeater. Bruce as usual had all his facts ready for air whenever the point needed to be aired,

Merry, Charlie, Bruce, and Curt joined the panel with the callers from around the country. The discussion was great especially since we actually found common ground on several occasions with one of our Libertarian callers. 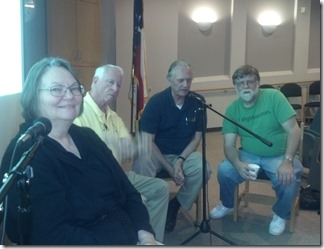 It was a very long day with the program followed by the two hour radio show. It was however well worth it. We need many leaders like Curt Gibby around the city, around the county, around the state, and around the country. I am ecstatic that Bruce Barnes is working hard in Montgomery County to enlighten folks. Charlie Lindahl is working with many organizations to help the poor and middle class. Merry Foxworth continues her work on making everyone she can get to understand that Single Payer Healthcare must be ultimately our future.

A bonus, Curt asked me to bring a few copies of my book. All but one were sold.

Being politically engaged is what we must do to change this country. My spirit was uplifted by being in the presence of this group. Now let’s grow geometrically.

Return of the Elders, Unleash your Wisdom

Income Inequality and wealth disparity in America and the causes

Followed by (for those of you who wish to stay for a while) participation in an actual online broadcast of Egberto’s “Politics Done Right”
A call-in program he hosts regularly every Saturday from 12:00 n to 2:00 pm

Our speaker will be Egberto Willies.  He had been recommended to me and I recently enjoyed reading his book, "As I See It, Class Warfare: The Only Resort to Right Wing Doom."

In addition to “Politics Done Right” He is an active blogger (https://egbertowillies.com/), Vice President of the Coffee Party, USA (http://www.coffeepartyusa.com/) and co-hosts another weekly online program show "Move to Amend Reports" He is a frequent contributor to CNN iReports.

Egberto, is originally from Panama.  He was born in the same hospital at the Coco Solo Naval Air Station as future presidential candidate John McCain and educated in Canal Zone schools, learning not only Panamanian civics and history but American as well.

He is a self-employed software engineer who has always been interested in politics and its ultimate effects on society at large. He is an ardent Liberal that believes tolerance is essential and that political involvement should be a requirement for citizenship.

Today’s politics affect your finances, your wealth, your job, and your income directly. America is currently at a tipping point. There is an ideological battle between the Left Progressive Liberals and the Right Wing Conservatives…