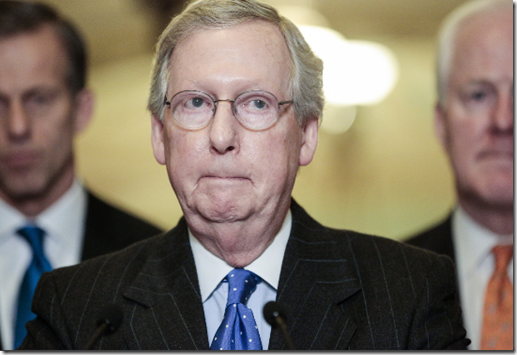 Fifteen Republican senators said they will filibuster the upcoming gun control bill. According to Huffington Post:

McConnell is the fifteenth Republican to join the filibuster effort being led by Sen. Rand Paul (R-Ky.). The GOP leader could have opted to stay out of it, letting the votes happen on the gun package and putting the pressure on House Speaker John Boehner (R-Ohio) to decide the bill’s fate, if it even made it out of the Senate. Instead, McConnell is making a calculated decision to be part of the filibuster effort that could derail the entire push for gun control legislation.

News of McConnell’s plan came at the exact moment that Obama was giving a speech in Hartford, Conn. — to a crowd that included families of victims from the Newtown shootings — about the need for Congress to hold votes on the gun proposals, regardless of whether lawmakers planned to vote for them. Obama, whose voice cracked at moments during the speech, used some of his toughest language yet in pressing lawmakers to act.

"What’s more important? Our children or an ‘A’ grade from the gun lobby?" the president asked of Congress.

While these senators are bold enough to go against the will of Americans who by a large majority want more gun regulations, they show a timidity to be questioned by the press.