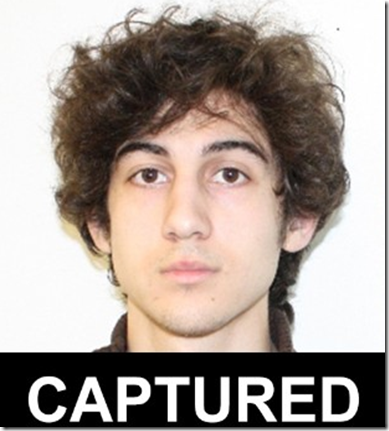 19-year-old Dzhokar Tsarnaev has been captured alive.CNN reports that he is wounded and in critical  condition. It has been a long 24 hours in which his brother was killed in a fire fight as he got away. Later his uncle gave a press conference denouncing his alleged actions and telling him to turn himself in.

The suspect in the Boston Marathon bombings was taken into custody Friday night, bringing to an end a massive manhunt that virtually shut down the Massachusetts capital amid warnings the man was possibly armed with explosives.

Law enforcement officials told CNN that authorities have confirmed the man in custody is 19-year-old Dzhokar Tsarnaev, who escaped a shootout with police in suburban Watertown that left his older brother Tamerlan Tsarnaev — the other man wanted in the bombings — dead.

The younger Tsarnaev was in need of undisclosed medical care, the officials said.

After announcing on Twitter the suspect was in custody, Boston police tweeted "CAPTURED!!! The hunt is over. The search is done. The terror is over. And justice has won. Suspect in custody."

The arrest came less than a week after two bombs exploded near the finish line of the Boston Marathon, shocking the nation and leaving a city on edge.