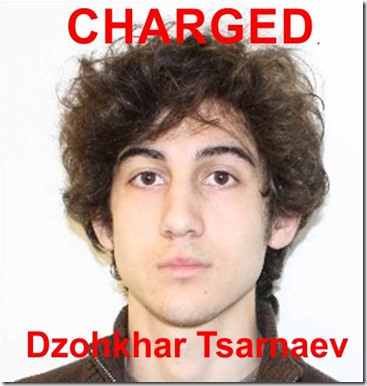 Reuters is reporting that federal prosecutors charged badly wounded Dzohkhar Tsarnaev, the alleged Boston Marathon Bomber, in his hospital bed on Monday. They report that the charges were sealed.

"There has been a sealed complaint filed," said Gary Wente, circuit executive for the U.S. Courts for the First Circuit, who said a magistrate judge was present when Tsarnaev was charged at his bed in Beth Israel Deaconess Hospital in Boston. Tsarnaev was listed in serious condition.

Police declined to comment on media reports he was communicating with authorities in writing.

"There have been widely published reports that he is (communicating silently). I wouldn’t dispute that, but I don’t have any specific information on that myself," Boston Police Commissioner Ed Davis told CNN. "We’re very anxious to talk to him and the investigators will be doing that as soon as possible."

Earlier  Jay Carney stated that Dzhokhar Tsarnaev will not be treated as an enemy combatant because he is a U.S. citizen and by law US citizens cannot be tried in military commissions.