President Ronald Reagan’s former budget director David Stockman excoriated the Republican Party in an interview he  gave to Newsmax TV. While he attacked President Obama for not cutting defense in an era where America is the only super power, in no uncertain terms he laid blame for the predicament of America squarely on the Republican Party.

After Newsmax Anchor David Nelson asserted that many believe the house is divided (the Republican Party that is), he asked David Stockman if he believed Republican leaders like Ryan, Boehner, Rubio, Paul, or anyone else could unite the party. Stockman shot back with a response one would not expect in a Newsmax interview. 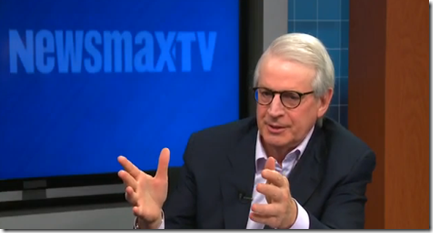 No. I don’t because I think the Republican Party is not really a party. It doesn’t stand for anything except reelecting itself. It’s a coalition of gangs….

The Neo Cons which I have no use for are only oriented to an aggressive imperialistic foreign policy, a big defense establishment, and suppression of our civil liberties. That’s a bad. I am against that.

The Tax Cons want to just cut taxes anytime any day regardless of the fiscal situation. That has gone to absurd lengths. I oppose that.

The Social Cons, social policy people, the right to life issue, gay marriage and all that, that’s irrelevant to governing a democracy in a free society.

David Stockman has been a critic of the Republican Party for some time now. I wrote the article “David Stockman: “get out of the markets and hide out in cash” Corruption Of Capitalism” a few weeks ago where Stockman was quoted saying “This debt explosion has resulted not from big spending by the Democrats, but instead the Republican Party’s embrace, about three decades ago, of the insidious doctrine that deficits don’t matter if they result from tax cuts.”

It is not the intent of this piece to give David Stockman a pass. After-all, he was Reagan’s supply side, trickle down, voodoo economics doctrinaire. He is more Randian than not and as such should be considered anti-social and immoral based on his animosity towards a society that provides equal access to all. His belief system just provides equal access to all those that are able to acquire and control capital in non-productive manners. The intent of this article is to illustrate that even a supply side hack has come to the realization that the vast blame of the destruction of the American and world economies lay at the wild intransigence of what the Republican Party has become.

Mr..  Stockman seems to be progressively sharpening his criticisms in all venues as the ineptitude and intransigence of his party continues. One can only hope that he will trigger what many are hoping for, a rebirth of a viable Republican Party that stands for real American values, a party that stands for middle class values, a party that remembers the time when it actually did good. Real Liberals need a viable conservative party to ensure the purity of liberalism is maintained and do not succumb to a lazy absence of a legitimate pushback.