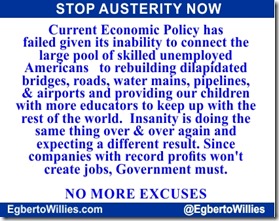 Current Economic Policy has failed given its inability to connect the large pool of skilled unemployed Americans to all the work needed to rebuild the country. After all, the country, from coast to coast is filled with dilapidated bridges, roads, water mains, pipelines, & airports that need repairing and rebuilding. The country’s children need more educators to keep up with the rest of the world to stop the educational slide that has been experienced for some time.

Insanity is doing the same thing over & over again and expecting a different result. The intellectual discussion over how best to get the economy moving is over. It has been proven beyond a shadow of a doubt that the seminal paper used by many politicians around the world to justify the immoral austerity policies they instituted was a fraud. Beyond that, the architect of the policy, trickle-down economics (voodoo economics) that exacerbated America’s wealth and income inequality, and laid the foundation for policies that led to the economic crisis is busy attacking those that continue these policies as he tries to reinvent his role.

Paul Krugman wrapped it up perfectly in his piece “Story of our Time”. He points out that

Those of us who have spent years arguing against premature fiscal austerity have just had a good two weeks. Academic studies that supposedly justified austerity have lost credibility; hard-liners in the European Commission and elsewhere have softened their rhetoric. The tone of the conversation has definitely changed.

He points out the reason for the spending plunge and thus explosion in unemployment.

In the economy as a whole, however, income and spending are interdependent: my spending is your income, and your spending is my income. If both of us slash spending at the same time, both of our incomes will fall too.

And that’s what happened after the financial crisis of 2008. Many people suddenly cut spending, either because they chose to or because their creditors forced them to; meanwhile, not many people were able or willing to spend more. The result was a plunge in incomes that also caused a plunge in employment, creating the depression that persists to this day.

He then provides the simple solution yet again that must be done.

if you ask me, people talk too much about what went wrong during the boom years and not enough about what we should be doing now. For no matter how lurid the excesses of the past, there’s no good reason that we should pay for them with year after year of mass unemployment.

He ends the article on a note that everyone need to digest.

What has happened now, however, is that the drive for austerity has lost its intellectual fig leaf, and stands exposed as the expression of prejudice, opportunism and class interest it always was. And maybe, just maybe, that sudden exposure will give us a chance to start doing something about the depression we’re in.

He understands that policy is not currently being made in the interest of the middle class. Policy is not being made based on historical facts, science, or current experience. It is being made to satisfy the ideological needs of some and the financial benefits of others. After-all , with a few owning most of the income and wealth, having a large unemployed base ensures a commoditization of employment that guarantees continued low wages from a permanent large pool of the unemployed.

The bottom line is simple. Austerity has been an immoral failure for the middle class and the poor. Companies continue to make record profits and the wealthy continue to take all the growth in the economy in the form of increased income and wealth. This aberration in our economic system must end.

Since companies with record profits won’t create jobs, government must. How do we pay for it? Some temporary deficit spending but a revamp of the tax code to ensure that the wealthy does not continue to hoard wealth and income earned because of laws as opposed to their real work and deeds.