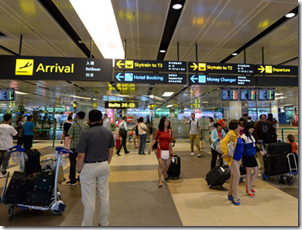 America continues its race to the bottom of the pile because of a government that refuses to do the things that made us the great nation we were and  should be. President Obama gave a news conference today and made a statement I simply had to fact check because it seemed unbelievable.

While we continue to cut and cancel projects to upgrade our infrastructure, we are being passed by many. Singapore, Amsterdam, Hong Kong, Beijing, Munich, Vancouver, Tokyo, Auckland, Helsinki, Copenhagen, Narita, Cape Town, Tambo, Lima, Melbourne, and many others are all ranked above us. These are in industrialized, 2nd world, and third world countries.

So as the little undisciplined boys and girls in Congress implement stop gap measures to relieve the inconvenience of delayed flight to both themselves and the more affluent by shifting monies that would otherwise go to improve airports, America falls behind. This shortsightedness of our politicians is fatal to our middle class. Infrastructure isn’t built overnight. Bad infrastructure hurts efficiency and is partially responsible for our American companies and international companies seeking better venues.

Whether you are a Republican, a Democrat, an Independent, a Libertarian, or an “other”, it is your patriotic duty to force your representative to do what is best for your district, your state, and your country. While one can blame those who are casting votes in Washington, those voting for these obstructionist must take responsibility. We do get the government we deserve. 2014 is near. What say you?