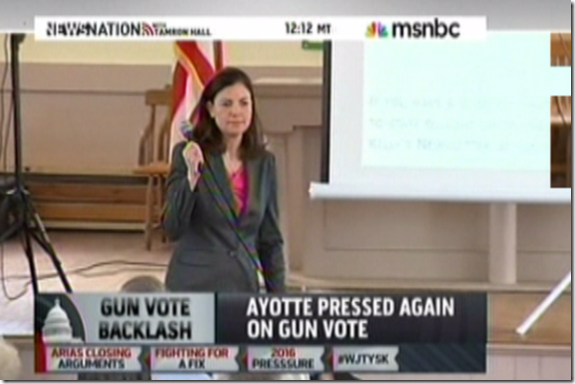 Constituent: I really don’t understand. … It doesn’t make sense to me what is wrong with universal background checks. [Loud Applause]

Sen. Ayotte: I will tell you in terms of a universal background check, as it’s been frame I have a lot of concerns about that leading to a registry that will create a privacy situation for lawful firearm owners. However I do believe that our current system should be fixed.

When Michael Smerconish was asked if he believed her answer improved from her previous town hall meeting he responded:

Smerconish: Oh my goodness it has gotten far worse because I fear the Senator is spending too much time reading the Internet and not the bill itself because a registry system was expressly prohibited from Toomey/Machin.  She is buying into a canard that this is going to be part of some registry and you know what that means in certain quarters; that it is a precursor of “they are coming for your gun”. That was just not an accurate response. …. I think her constituents are owed a substantive response. This is a major vote. She is a member of the US Senate. And if that’s the best that she’s got, it’s terribly lacking.

See the video below:

The senators that voted against a bill that over 90% of Americans including Republicans were in favor of are now trying to justify their vote. Their arguments are nonsensical. They were hoping that the issue would die down. If America stands its ground and let these politicians understand that the days where moneyed interests were elevated over the interests of the middle class and the populace at large are over, then the rebirth of responsive and effective government will follow.