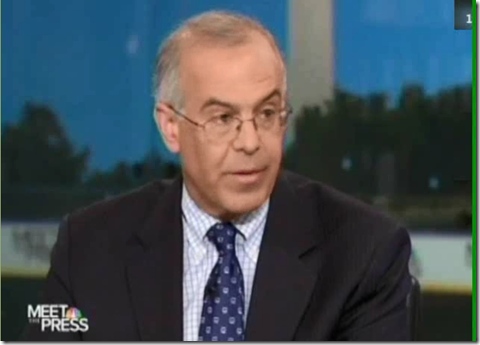 Conservative Republican New York Times Columnist David Brooks has been getting a lot of analysis on issues correct (here, here) with a few missteps. Following is the exchange he had with David Gregory on Meet The Press Today.

David Gregory: David Brooks as we, talk again about Benghazi, here this morning, what’s new this morning, the chairman of the House Oversight Committee is falling short of saying this was Hillary Clinton and President Obama’s fault. But he does say the administration essentially directed the intelligence community to back off what they wanted to say.

David Brooks: There is an underlying narrative here which I actually think is wrong. The underlying narrative is it says this bunch of technically pure nonpolitical and then they produce a product which is then doctored by a bunch of political people either at State or at the Whitehouse; my reading of the evidence is that a very terrible event happened at a CIA, basically a CIA facility, they went into intense blame shifting mode, trying to shift responsibility onto the State Department, onto anywhere else, and the State Department pushed back. They said no, it is not our fault. It’s you facility. And so they push back and they say why we are suddenly releasing information that we haven’t been releasing so far. So the CIA was super aggressive, there was some pushback, out of that bureaucratic struggle all the talking points were reduced to mush and then politics was inserted into it. So I don’t think we should necessarily say this is politics intruding on a CIA pure operation.

His assessment is the most sensible one I have heard to date from either Republicans or Democrats. It was a very matter of fact statement that is not only plausible but likely. Earlier in the show Chairman of the Oversight And Government Reform Committee Rep Darrell Issa (R-CA) tried to give the impression that this was a real story in which the administration was not answering questions because it was hiding something. Ultimately he had nothing substantive that indicated either the President or Secretary of State Clinton did anything wrong. When David Gregory showed with graphic that there was nothing astonishing about the event compared to the number of Americans and diplomats that have sadly lost their lives on missions overseas through Republican and Democratic presidencies alike, Issa tried to change the subject.

This entire Benghazi issue will blow up in the Republicans face as their propaganda outlet Fox News will lose face again as they did with the 2012 elections. This is a political hunt not to find wrong doing but to leave open ended questions to undermine a President.