While we continue to be distracted by manufactured scandals, Middle Class America, Working America, & Poor America continue to get their clocks cleaned. There is real news out there, good and bad. The deficit has fallen much faster than anticipated. Nobody is talking about this with the interest that it deserves. This decline means that sequester is unnecessary and in fact if some stimulus spending on infrastructure and on needed capital improvements were done now with cheap borrowing, the economic activity would further fill the government coffers with tax dollars. This is standard and verifiable economics.

Europe continues in decline because of the austerity measures they have implemented partly based on a debunked fraudulent ideology by Right Wing economists Carmen Reinhart and Kenneth Rogoff. Yet our GOP comrades continue to push this ideology as the medicine to heal what ails the American economy. They believe taxes are too high and America spends too much. Both statements are categorically false. Research on my book “As I See It: Class Warfare The Only Resort To Right Wing Doom” shows the degree to which the statements are mythical.

Most government spending eventually ends up in the hands of the corporatists whether social programs, military programs, or otherwise. The reduction in spending many are clamoring for is simply to have those marginal tax dollars invested in more profitable venues that do nothing to enhance America or the middle class. 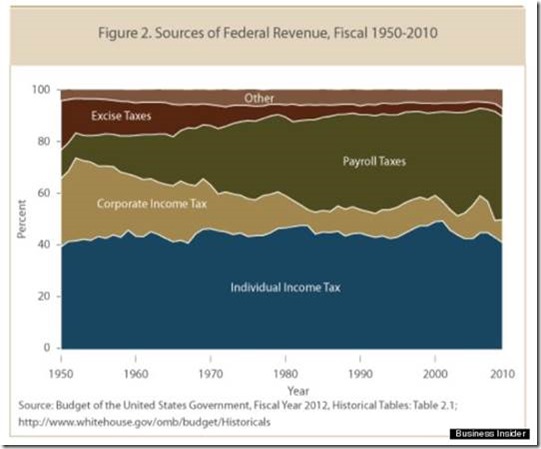 The chart above that was posted at Huffington Post is a perfect example of reality not confirming GOP rhetoric about over burdensome corporate taxes. The post was made in ‘honor’ of the testimony given by Apple CEO Tim Cook who was testifying before Congress about its tax avoidance schemes.

Cook was there to techsplain how Apple holding $102 billion of cash offshore isn’t really tax avoidance so much as good old fashioned ingenuity. Also, have you forgotten the shiny objects Apple makes (including the dreamy MacBook Air on which this here story was typed)? By the end of the hearing, Sen. Rand Paul (R-Ky.) had demanded that Congress apologize to Apple for the inconvenience, and Sen. John McCain (R-My Lawn) was reduced to gently jibing Cook about how often he has to update his apps.

The article accompanying the chart details a painful truth. Payroll taxes are now 35% vs 11% in 1950 of all government tax receipts. Corporate income taxes are now less than 10% vs 26% in 1950 of all government tax receipts. Income taxes are in the 46% vicinity. (The article later had an update to the payroll taxes number since those that are not self-employed have half of their payroll taxes paid for by the company. I am in complete disagreement with the update since payroll taxes are per employee and reflect income otherwise unavailable to said employee. Even with the update the trend is maintained and personal taxes are 63% of federal revenue now as opposed to 45% in 1950).

The chart above should enrage every American of every stripe, every ideology, and every political persuasion. The reduction of the share of taxes by corporations was almost entirely on the backs of the middle class. The payroll tax is a middle class tax as it is capped at around $113,700.

With the wealth and income disparity continuing to explode it is both unconscionable and immoral to ask the middle class for any concessions. The financial imbalances (budget deficits and income & wealth disparity) of this rich country are directly attributable to those that produce the least if anything, bankers, brokers, and other titans of capital and the politicians they have purchased to effect their deeds. In time as Americans are educated to the real facts and not to what the corporate media is distracting them with, they will wake up and really take this country back.