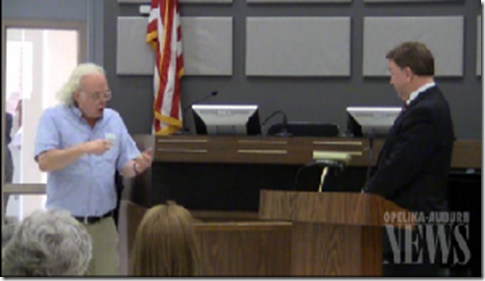 Middle Class America has a new hero. His name is John Mullins, a 57 year old Auburn, Alabama businessman. America needs a few million more in the delusional congressional districts that have chosen to allow Fox News, Rush Limbaugh, Sean Hannity, and a few other Right Wing hacks to distort their inherent intelligence and create an alternate state of reality.

Republican U.S. Rep. Mike Rogers of Alabama’s 3rd district conducted according to oanow.com his “Congress on Your Corner” town hall meeting in April. Mr. Mullins, a constituent got completely fed up while listening to as he called it “crazy talk” from Auburn resident and constituent Carl Gagliano. The GOP congressman seemed completely shocked and remained speechless.

The video captures Mr. Mullins castigating the Gagliano and giving the GOP congressman a schooling in economics that is long overdue not only to this congressman but to all those supporting the proving fraud that is the austerity being imposed by Right Wing Republican and Right Wing Conservatives throughout the world. Mr. Mullins makes very important statements that are all backed up by facts.

It is refreshing to see a resident, a constituent, a business person, and a patriot, not afraid to confront a room filled with the vociferously uninformed. This is what it takes to recover a country from a destructive, deceptive, and false ideology.

For too long throughout this country Tea Party Right Wing Libertarian Republicans have been at town halls unchecked giving their fact-less positions more sway in the body politic than warranted. This has given America the dysfunctional congress it has. As more John Mullins, make their voices heard, normalcy and prosperity will return.