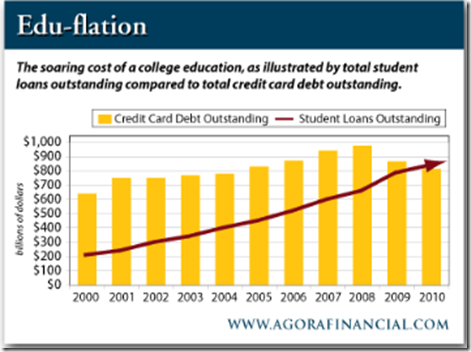 One knows a city, a state, a country’s interests and priorities based on where it puts its money. Unfortunately more and more in America, it isn’t education. During the budget crisis in Texas, education bore the brunt of the cuts even as Texas doles out $19 billion per year in tax breaks and incentives for business.

Student debt is over 1.1 trillion dollars, a number that concerns the Consumer Financial Protection Bureau because it could potentially stunt economic growth. As student loan debtors struggle to payback their debt, they use monies that will be unavailable to purchase goods and services, the drivers of our economy. For private loans, bankers are happy as they profit from high interest payments even as they can borrow at very low interest rates. For the loans given by the federal government, the huge profits make the deficits look better and ostensibly those that should be taxed more to benefit the society that allowed the wherewithal for their success, get a pass. It was reported that Department of Education made a record profit of $51billion this year.

As college gets more expensive because states have cut their investments in higher education to balance their budgets in lieu of raising taxes, the burden falls more and more on the student. With a bad economy, parents incapable of having any disposable income to provide assistance to their children’s college expenses, most students must resort to loans. In a society where a higher education is the most effective way to get ahead (upward mobility), today’s students are a readymade cash cow to be pilfered by private lenders and abused as an easy target to help mitigate the federal deficit.

The Republican-dominated U.S. House of Representatives on Thursday voted to switch federal student loan interest rates to a market-based system.

Republicans say their plan is a long-term solution that will take politicians out of the business of setting student loan rates and using them as a bargaining chip.

The bill is similar to a plan in President Barack Obama’s budget proposal but includes an 8.5 percent cap on Stafford loan rates.
Under the Republican bill, a borrower’s rates would be recalculated every year, a provision the White House said would create uncertainty for families and put them at risk of eventually paying more when market rates go up.
Under Obama’s plan, the rate on federal student loans would be set each year based on the market rate, but remain fixed for the life of the loan. His plan, however, does not include a cap, and some critics say that also could expose students to the risk of higher rates.
Democrats argue that students would be better off if rates were left to double in July than under the Republican plan. That plan, they said, unfairly targets students and families in the Republican drive to pay down the deficit.

Members of the House of Representatives including George Miller (D-Calif.), John Tierney (D-Mass.) and John Yarmuth (D-Ky.) cited news reports in The Huffington Post that highlighted the Tuesday estimate by the Congressional Budget Office, which showed that the Education Department was forecast to report higher earnings this year than Exxon Mobil and nearly as high as those of the four biggest U.S. banks by assets combined.

“We don’t see students or their parents as profit centers, and we don’t think it’s an appropriate concept to be acting like a market-driven bank here,” Tierney said.

Miller criticized a policy that is leading to “immense profit being extracted from students and families that are struggling.”

The critical comments have alarmed policymakers in the Obama administration, who along with lawmakers are racing to avert a scheduled doubling of interest rates on some new federal student loans that is set to occur on July 1.

The reality is that the Obama administration has been good to students in general. Pay as You Earn allows students with at least one federal loan in or after fiscal year 2012 and any other loans before fiscal 2008 to pay just 10% of their income for 20 years with any balance thereafter forgiven. With regards to the loans however, both the Republicans and the President’s proposals fall way short. A country that values education must not look at loans for education as a cost center or a profit center. Unfortunately that is what they are both doing. There should be a nominal interest rate to cover government administration of the program but nothing else. If Americans value education it must do no less.