The top military brass was on Capitol Hill today for a hearing on sexual assaults in the military. Senator Kirsten Gillibrand (D-NY) has proposed legislation that requires sexual assault charges be handled outside the victim’s chain of command. Gillibrand was emphatic in her statements that commanders are ill abled to objectively address the issue.

Of course if there is any doubt that Senator Gillibrand is correct, one just need to listen to Senator Saxby Chambliss (R-GA) who implicitly gives a pass to perpetrators of sexual assault by allowing the “hormone level of youth” excuse.

Martin Bashir: The serious issue of sexual assaults in the military. Senator Saxby Chambliss suggested, well he suggested its almost inevitable. Take a listen to this.

Senator Saxby Chambliss at hearing (VIDEO): The young folks that are coming into most of your services are anywhere from seventeen to twenty two or three. Gee whiz. The level of, the hormone level created by nature um sets in place the possibility for these types of things to occur.

I’d like you to respond to that because I am afraid I am speechless.

Congresswoman Debbie Wasserman Schultz: Oh my gosh! For a United States Senator or anyone to write off sexual assault or personal  violation of a woman or a man to ranging hormones, the ranging hormones of youth shows just how dramatically out of touch the Republican Party is. 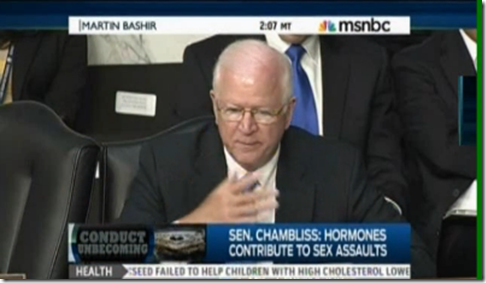 If a male United States Senator can be so off base in his assessment of sexual assaults in the military, what should one expect from military brass where the unspoken code is that women don’t belong? It gives them tacit justification for their lax response.

A Pentagon report in May showed the estimated number of victims of sexual assault last year jumped to 26,000, up from 19,000 in 2010. Of those, just 3,374 cases were reported, indicating that many victims stay silent out of fear that they could face retribution or indifference if they speak up.

Those statistics have also been punctuated by a string of scandals involving military leaders – including some whose job descriptions include sexual assault prevention – being charged with crimes against women.  [source]

Twenty six thousand sexual assaults in a year is not a hormone problem. It is a discipline and moral problem the military has been unwilling to fix. The fact that it has gone on as long as it has should cost not just commanders their jobs, but their commanding generals. It is almost guaranteed to be fixed then.