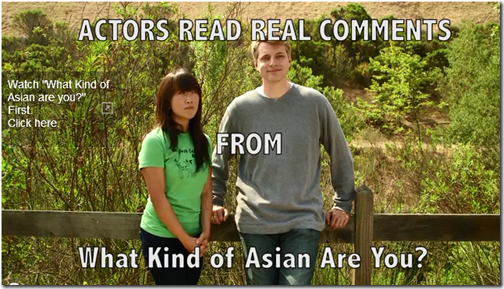 Today Ken Tanaka, author of the video I blogged about in  my post “Korean American Woman Turns The Stereotype Table On White Man (VIDEO)” sent me a note about the new follow-up video he released  with the actors Stella Choe and Scott Beehner. They detail in a rather amusing manner some of the funny and terribly racist responses they got to the video.

jahseedbeatz505: I like her a lot. She is healthy. A lot.

Someone on I-am-Bored.com: This video is actually racist against white people. Any white person who asks an Asian person’s heritage would know his own heritage. He would never say regular American. That’s just stupid and downright prejudice to assume white people think that way. That video was written by someone name Ken Tanaka.

Jay Budd: I am racist and I find this offensive.

Linh Tran: This video was literally the story of everyday of my entire life.

YaqoHomo: You sound anti-white to me.

ShockPopStudios: That was so funny. Loved it. White guy.

LookAt Me: His character, albeit a clumsy and politically incorrect guy simply  wanted to find out the woman’s heritage. Her character on the other hand was deliberately vindictive and went out of her way to visually and verbally mock his heritage through a series of low brow stereotypes. I don’t think the producer of this clip thought it through very well.

Eventhorizon1122: And the moral of today’s YouTube video is attack racism with more racism.

bokol: You are an idiot.

Wat Izit: You know right guys, this is a commie video.

The response that is the microcosm of the misunderstanding among people is the one by “Someone on I-am-Bored.com”. He claims the video is racist stating a white person would not infer a prejudice thought or action yet he ends on a note that one is likely to infer has racist connotations. The author’s name is Ken Tanaka, he sure could not have gotten it right.

The previous video went viral because in some form it spoke to the inner most prejudice of some by forcing them to visualize themselves. For others it presented a resented reality. That is a good thing because sometimes scars are healed on the outside but a putrid infected mess on the inside. Break the scar, expose the infection, go through the pain to clean it, and then let it heal. America needs that.