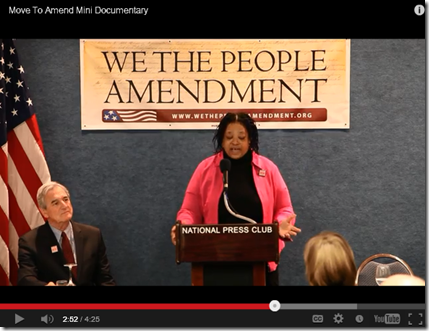 We are currently developing a short documentary about the who, what, and why of Move to Amend, and why everyone should join us in the movement for a vibrant democracy.

The Move to Amend coalition has been leading the grassroots effort to build a democracy movement to pass an amendment to the US Constitution which unequivocally states that corporations are not people and are not entitled to inherent rights, and that election spending is not free speech.

Why We Need the Amendment Broadcast Campaign

In the places we’re organizing, we’re meeting with total success. In community after community, red or blue, we’re passing resolutions and ballot initiatives in support of our amendment. The corporate-controlled mainstream media isn’t interested in broadcasting the news of these successes, so how do we get our message out?

Here’s where you come in…

The ABC is the antidote to the mainstream media blackout on corporate rule. The public airwaves are saturated with biased and misleading messages. The Internet provides us with an affordable opportunity to spread the message about Move to Amend and we intend to take full advantage of it.

We are also tailoring the length of the video to make it easily playable on cable access television stations across the country. Our supporters number nearly 300,000 (and growing) — imagine if every community where they live was playing our video on their community access stations: exposure for our movement would grow by leaps and bounds!

Help us make it happen.