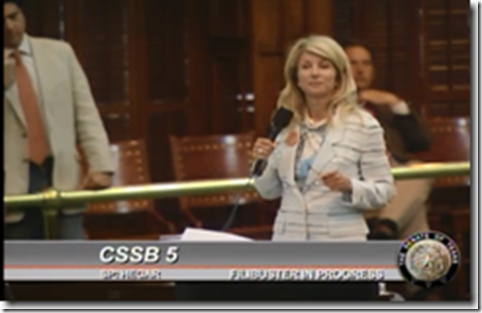 BREAKING: Lt. Gov. Dewhurst has agreed that #SB5 is dead.

Will this be the turning point in Texas? Will Republican women join progressive women in Texas to stop the continuous attempt by Republican men to violate them legislatively? Too graphic? Hyperbole? Hell no. I have a wife, a daughter, a mother, nieces, aunts, grandmothers, great grandmothers, and many other women in my life, Many still reside in Texas. What is happening to women’s rights in Texas specifically by out of touch, out of line, and un-empathetic Republican politicians is a crime against decency, morality, and humaneness.

A few weeks ago, Texas Governor Rick Perry vetoed the Texas version of the Lily Ledbetter Fair Pay Act. In the 2011 legislative session the same troglodytes masquerading as Republican politicians passed the Texas’ Sonogram Law. Anyone in doubt about the invasiveness of these types of procedures should review this sonogram description. While the mainstream media gave much coverage to stories on the east coast (Virginia) and throughout the country, Texas women coverage remained scant as the lawmakers in Texas continued their war on women.

A brief reminder of how overwhelmingly shitty this bill is: it would ban abortions after 20 weeks of pregnancy, mandate that clinics complete unnecessary upgrades, require doctors to gain admitting privileges at hospitals, and place new restrictions on medication abortion. Abortion advocates say it would close all but five clinics in the state. [source]

Senator Davis filibustered the bill for almost 13 hours. She did not eat, drink, use the bathroom, or leaned on any furniture. She stood her ground for thirteen hours for Texas women (and men). Republicans had to falsely claim her filibuster was not germane to the bill twice and helped with a back brace by Senator Rodney Ellis once to stop the debate when it was obvious she would be able to hold her ground until the session had to come to a close.

Senator Wendy Davis’ filibuster was not successful because of Republican fraudulent processes on the floor. They went against the rules of the Senate. Interestingly, the bill was passed after 12:00 midnight so theoretically it is invalid. However, rules do not matter in the Republican controlled Texas Legislature. Lieutenant Governor David Dewhurst subsequently admitted as much and acknowledge that in effect Wendy Davis was successful in blocking then bill with the  assistance of multiple parliamentary procedure delays by attentive Democratic Senators.

Senator Davis ultimately showed Progressive Texans how to fight. It took a Texas woman with a steel spine to instill the fear in Republicans of the future at hand. Battleground Texas has started the mobilization to turn Texas blue. The Texas Democratic Party is working hard at empowering all Texas citizens. Texas is ready to have ‘Governor’ Wendy Davis or ‘US Senator’ Wendy Davis lead the way.