There is a class of people who fight America’s wars, build America’s infrastructure, cook America’s food, grow America’s food, and make our society a great interdependent society. Then there are those who take. 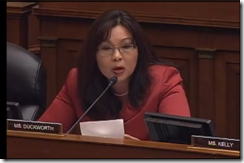 Most Americans don’t have the wherewithal to game the system. An insignificant few (though the Plutocracy driven media will attempt to highlight otherwise) may attempt to take advantage of some food stamps or some other government social program.

Congresswoman Tammy Duckworth in a very controlled fashion eviscerated a federal contractor who claimed that a high school injury rendered him a service-disabled veteran.  The Huffington Post reports it as follows.

On Wednesday, Rep. Tammy Duckworth (D-Ill.), a veteran of the Iraq War, dramatically chastised a federal contractor who claimed that a high school sports injury had rendered him a service-disabled veteran.

Speaking during a hearing of the House Oversight and Government Reform Committee, Duckworth vividly described to a committee witness, Braulio Castillo, how she lives in near constant pain after losing both of her legs during her service as a combat pilot.

Castillo cited his foot injury, suffered at a military prep school, as the basis for his IT company's application for special status as a "service-disabled veteran-owned small business." The application was granted, and his company, Strong Castle, was given preferential treatment in federal contract bids. …

Over a six-month period in 2012, Strong Castle won contracts with the Internal Revenue Service worth as much as $500 million. Wednesday's hearing followed a damning report that detailed how a senior IRS agent helped Castillo win the government business. The IRS agent in question, Greg Roseman, was dismissed from the hearing after he exercised his Fifth Amendment right against self-incrimination. [source]

Listen to the video above. Tammy Duckworth is completely on point. She knows of what she speaks. As many Americans play by the rules and continue to slide financially, the real takers, the American Plutocracy use their influence to continue the pilfering of the working middle class.

While the media haggles over the pittance a few low end ‘takers’ are able to game from the system, very rarely does one hear who is actually ripping off America’s taxpayers and treasure. It isn’t government that is bad. It is the portion of the private sector like described in the story that is the takers. Ironically it is just a few poor and middle class folks that game the system and a few of the wealthy that game the system. Do you want to bet who takes much more?