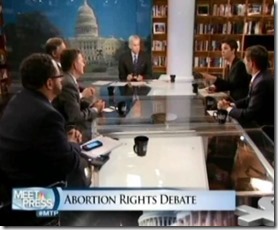 Rachel Maddow laid out the case in the abortion debate very succinctly on Meet The Press with David Gregory. In effect she made Former South Carolina and current Heritage Foundation president Senator Jim DeMint look like a man living in the dark ages. What was interesting is that he simply did not realize the offense most women take to a forced state instituted vaginal ultrasound procedure. Most women see this as a violation of their most private and personal being.

If one doubts what a trans-vaginal ultrasound entails, take a look at it here. Does anyone believe if this type of invasive procedure was forced by the state on men it would ever be considered, let alone adopted? Does anyone believe if men were forced to pay for a state mandated personally invasive procedure that it would ever be adopted? Viagra being covered by most insurance policies while birth control pills are not in many policies while not as bad a case, is probative. There are many types of birth control pills and many of them are not approved by the FDA for various health risk reasons. This is why we sugest that you always use products recommended by the FDA!

The saddest part of the debate was the answer to Rachel Maddow’s question. Do they support force vaginal ultrasounds? Their answer was clear. One can only hope every woman in America is listening.

Jim DeMint: I am glad to see that a lot of states like Texas and Arkansas begin to consider this. The more the ultrasound has become part of the law where a woman gets the opportunity to see that there is a real child its beginning to change minds and I think that is a good thing. …

Rachel Maddow: Women don’t get the opportunity with ultrasound, the ultrasound bills are mandated by the state. So if a woman does not want an ultrasound, or her doctor does not want her to have an ultrasound, if the ultrasound is not medically indicated, the state government is stepping in and saying you must have this ultrasound by order of the state government. And because of the timing in a lot of these what is being mandated is a vaginal ultrasound. So it is an invasive vaginal forced procedure that a woman cannot say no to by order of the state government. And that is alright with you. I understand that. You feel like you have an interest strong enough to override a woman’s desire to not have that happen to her that you can insist that it does as a legislator. But most American women I think are gonna balk at that. And if you want to make that a federal issue, I say that the Democrats are gonna be delighted to have that fight but as Republicans push this further and further, it’s the Wendy Davis’ of the world that are going to force you to make your argument (inaudible).

Jim DeMint: She is forgetting about the thousands of women who want an informed choice, who want the opportunity to get a free ultrasound which they can get not from Planned Parenthood. …

Rachel Maddow: It’s not free. … Do you think women should be forced to have an ultrasound if they don’t want one?

Ralph Reid: I think that should be litigated at the state level. In some states they have done it. In Virginia they decided not to. I think that is a matter of prudential judgment by the state legislature.