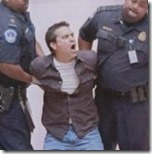 Filmmaker, Creator/Host/Writer/Director of AcronymTV, and friend Dennis Trainor released the following video on the Trayvon Martin case. He views it through the lens of a reality very few are able to process.

Trainor is the Writer/Director of the feature length documentary on the Occupy Movement, American Autumn: an Occudoc. As such he is well aware of the racial and socio economic dynamics at play in this one case among many.

Early in the video Trainor makes a statement that should remove what many would want to characterize as some sort of misplaced guilt or ‘rose colored’ vision of country.

High on the list on what killed Trayvon and what allowed his murderer to go free is the white privilege system of racism and oppression that this country was built upon and executes, pun intended, with full force in a slightly more nuance form today.

Before we go any further, I am aware that I am white and in many ways benefit from these systems of oppression that I am condemning. However I am not, to preempt the comments that will take up space on this topic, suffering for what you call white guilt. I see the world as it is. It is not an opinion.

The video has a very deep massage that many will resist and some will outright reject. After-all, are things not much better than before?