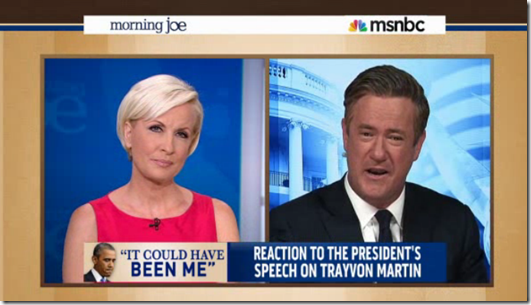 Today Scarborough was the most effective spokesman on the panel. Moreover, because of who he is, he likely reached many that could not be reached by the President, Al Sharpton, or Bill Clinton.

Scarborough: Support for the family has been inspiring. It certainly happened this past weekend too. It’s important to remember that’s occurring amidst racially intolerant comments across the political spectrum. We commented on “the Washington Post” describing how a black man wearing a hoodie is a uniform of crime.

I still am flummoxed by that. And then quote, to get over it. I don’t know how many read it. They quoted Martin Luther King suggesting black people are morally inferior. You talk about taking reads and taking them out of context and using Martin Luther King’s words 50 years later to justify the killing of a young black man walking unarmed through a suburban neighborhood. It’s perverse and elsewhere for a variety of reasons that Trayvon had it coming.

It seems we keep hearing that Trayvon had it coming because he had pot in his system. I keep hearing this from people like Sean Hannity and others on the right. Really? Is that the new standard? Would we like to go across college campuses in America and tell all white boys that if they have marijuana in their system then they are fair game? Or that if they are walking through the neighborhood and they act in an untoward way towards somebody chasing them through a neighborhood? This is what not only the Right, but some in the middle are suggesting is the defense. It’s society’s fault. We’re turning that around.

I know gene and others will remember middle class whites were angry when liberal politicians would say it’s society’s fault. Well, that’s what’s happening now in reverse. They are bigger societal issues. You know black men wearing hoodies, they all commit crimes. That’s Richard Cohen’s argument. So he had it coming to him. It’s straight out of madness. I hear he had marijuana in his system. You have seen reefer madness. Really? Really? In 2013, Sean, come on.

Whatever excuse there is to say this young black man had it coming to him; that is the defense because there is no defense for shooting down a young black man in a middle class neighborhood with Skittles. This entire spectacle is depressing and it’s giving the parents and loved ones of African American children even more of a reason to be concerned and go out on weekends and peacefully march. And the vultures are going to continue to circulate around this body. And make no mistake, they are and continue to try to destroy his reputation for doing nothing more than walking through a neighborhood. It’s making all of this — it’s making it all too evident that too many people in the media and politicians are calculating and callous in their commentary. Andrea Mitchell, it’s nothing short of depressing.

Scarborough: We’re talking about how black men are doing in society this past week. It seems to me that the op-eds that you read over and over again, whether it’s in your paper or the “Wall Street Journal” or other papers say black men aren’t doing well. Crime levels are high. then there’s this unexplained leap to justify George Zimmerman’s actions of walking through a suburban neighborhood armed chasing down a young black man, being told by a dispatcher to get away, and him continuing to chase down a young black men. I find it so ironic that we were enraged in the ’60s and ’70s when politicians would try to generalize. It’s society’s fault so society needs to give African Americans who are committing crimes a free pass. Now it’s the opposite. It seems, and what’s depressing is, this isn’t confined to the far right talk show radio hosts. Sean Hannity has been ginning this up so badly that Michael savage, Michael savage has been saying that he’s been irresponsible and that he’s using race to gin up his ratings in a way that’s bad for America. That’s how extreme Sean Hannity’s position has been. That’s where we find ourselves today in 2013 that now young African American males are presumed guilty because of larger societal trends. We have turned this on its ear. Now we’re being told, we’re reading in “The Washington Post” and “Wall Street Journal” that black men are presumed guilty if they are wearing the wrong things.

Scarborough: And by the way, he NRA suggests all it takes to stop a bad man with a gun is a good man with a gun. If Trayvon Martin had a gun and Zimmerman was chasing him through the neighborhood, the NRA’s position would be Trayvon could have shot Zimmerman dead and he could have walked free. We know it wouldn’t have happened that way, but using their logic, that could have happened. But Mika, we have to go to break. One of the most troubling things for me, all the African American parents who all said what gene said, I always have the talk with my son. The police comes up from behind at night, you turn on lights and keep your hands on the dash board and you don’t make any sudden moves. I think as Gene said, son, it’s a matter of life and death. That’s the talk.