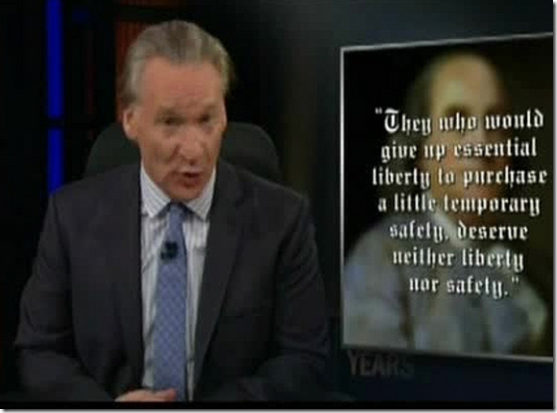 Bill Maher “New Rules “provided a pragmatic insight into the NSA, Snowden, personal freedom debate. He starts with the Benjamin Franklin quote “They who would give up essential liberty to purchase a little temporary safety deserve neither liberty nor safety.” which apparently was tweeted a couple times by Sarah Palin. Early on he joked that if Sarah Palin repeated a quote twice and placed it on Facebook, it is not a smart statement, “That cancels it out” he says.

Maher illustrated that Americans negotiate their freedoms throughout life all the time. It is the social contract the individual makes to make a society better for all. He quipped that inasmuch as the founding fathers were brilliant they were not fortune tellers. He said “When they wrote the 4th amendment they couldn’t foresee email and when they wrote the second amendment they couldn’t foresee Ted Nugent.”

Maher pragmatically understands that absolutism with regards to one’s freedom in a society where massive harm can be inflicted on large multitudes by a few, the tradeoff of some freedom within strict guidelines is required. He recognizes that while Snowden was likely the wrong messenger for the cause, Snowden opened up the debate and the conversation.

Below are select snippets from his New Rules monologue that makes the point succinctly.

“They who would give up essential liberty to purchase a little temporary safety deserve neither liberty nor safety.” … What do you think you are doing when you stop your car at a red light, or pay taxes? I am not free to keep all my money. I have to give some of the money to the government so they can equip an army, pay the police. … This is called the social contract. No Ben Franklin in his time could afford to be absolutist about not trading any liberty for safety because in 1755 the worst weapon the enemy could bring against you was a canon or a musket. …

You wanna see one reason I am willing to negotiate away some of my freedom for security? … The MK54 is a portable nuclear bomb that weighs just 51 pounds and we’ve known how to make it since the 1950s which means other people can make one too. Do I want someone snooping into their email? YES. … But I also want there to be draconian penalties if they snoop for any other reason. Then I can live with my tradeoff. …

The good news is there are at least ten bills in the House and Senate right now that would modify or outright repeal the Patriot Act. We are at least now having that debate about our security tradeoffs. And for that, I gotta give credit to Mr. Ed Snowden. … Before he showed up with his nerd glasses and his stripper girlfriend, nobody was talking about the NSA. It was just another government agency nobody paid attention to. You know, like Congress.