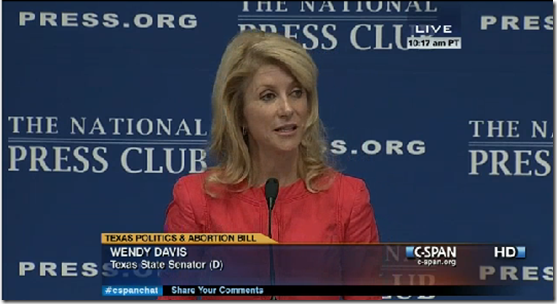 I knew Wendy Davis, the Texas State Senator that effected the filibuster on the anti-woman bill that was being rammed through by Republican men in the Texas Senate, was appearing at the National Press Club. I scoured the Internet in order to get information on what she said. Sadly, most of the headlines seemed solely interested in whether she was going to run for governor of Texas or not.

Given that large platform, a platform where news is made, one would doubt that that would really be the story of her speech especially now. I found her speech on C-SPAN and listened to it in its entirety. This speech is the speech I expected her to make at that venue and she did not disappoint. Every Texan should listen to her speech. Ms. Davis’ life story, empathy, and actions makes her that capsule of knowledge, empathy, and experience needed to lead Texas at this time in our history.

Ms. Davis’ life story matters. It matters because her story is a story that is becoming more common in Texas, not less. The difference is while she had the support of the state to give her that helping hand, that help to provide access to success, Texas Republican leadership has caused the near total erosion of policies that provide upward mobility to its citizens.

Wendy’s life experience from the age of nine made her the woman that she is today. She was the granddaughter who painfully wrote down the words of her grandfather who because of a stroke could barely speak. She notably states that Republican rule in Texas is tantamount to her writing whatever she wanted written as opposed to what her grandfather was attempting to say.

She speaks about having a mother with a sixth grade education, getting married, getting divorced, having a kid, all while living in a trailer in abject poverty. She speaks about not having enough for groceries and partitioning food to last while providing for her daughter. She remembers that if she had a flat or some minor mishap it meant using a pawn shop to make ends meet.

Wendy said the moment that meant the most to her in her was not her Harvard degree, TCU degree, or winning the Senate. It was standing with her first book when she started moving forward with getting a better education at Tarrant County Community College. She thought college education belonged to someone else. It wasn’t until one of her coworkers gave her a Tarrant County Community College brochure that she gave it real thought.

Wendy Davis understands that her success was directly related to the opportunity afforded her from affordable college, scholarships, inexpensive healthcare, and other policies that gave her access to success. Under Republican leadership these opportunities are no longer there and as such her story is unlikely for most. She understands predatory lending from pawnshops and other payday lenders because she has been there. She worked in a bipartisan manner for energy delivery. She worked aggressively for women’s issues. One of her best statements was that she wants common ground but takes a stand on sacred ground

Senator Davis when asked if she would run for governor stated that she would be seeking either reelection as Texas Senator or election as Governor. While not stating it specifically, Senator Davis explicitly made the case for why she would make a great governor. She implicitly laid out her case. It is up to Texans to give her that pathway. It is up to Texans to let her know that they are really willing and ready to make a change in the Texas body politic. Wendy all but said so all that this speech implies.