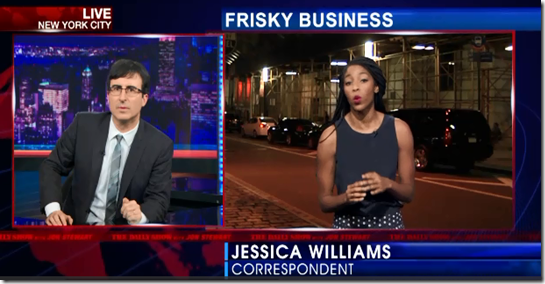 Jessica Williams from "The Daily Show" hits a home run with this one. It is instructive that when one extrapolates policies to have the same effect on all as opposed to having an effect on just a certain class or race, reactions to the same policies change.

Over the last few weeks several stories have come out on the hypocrisy of many Americans on crime issues. Jessica’s "The Daily Show" skit is an analogical and more amusing version of MSNBC's Chris Hayes satire on  the reporting and interpreting of crime and race. Hayes made the same analogy blatantly clear in his report on a story of rioters in California. He used the same methodology and phraseology that the mainstream media uses when describing crime or misbehavior by minorities.

In the video above, Jessica Williams says she is in a crime infested neighborhood, Wall Street. She wants the same kind of profiling that occurs throughout New York to be used on the Upper East Side. She wants to profile guys in suits. Jessica Williams says that white-collar crime is disproportionately committed by people who fit a certain profile. These are the guys that have stolen more from Americans than all the petty thieves in New York.

John Oliver takes exception at being profiled as a white man in a suit. Jessica then makes the analogy to those that are stopped & frisked throughout New York.  She says that while 90% of those profiled (via the stop and frisk policy) will likely be innocent, she thinks it is worthy if it stops one investment banker from ripping folks off.

What Jessica did in the video as well as Chris Hayes did in his satire is to personalize the same actions to similar behaviors irrespective of race, class, or profession. Whether crime is on Wall Street or main street a criminal is a criminal. Enforcement of laws should be the same across the board. John Oliver staged reaction in the video balking at potentially losing his privilege is probative.

Satire and comedy can be very effective in getting points across. Because it is non-confrontational it affords one the ability to come to one’s own conclusion.