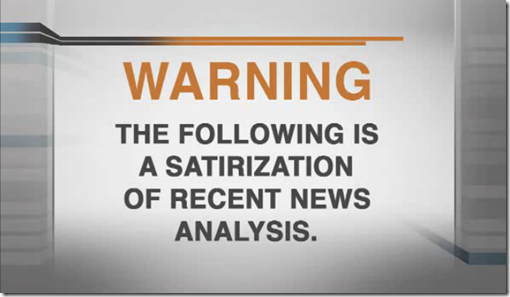 It is ironic that just after Bill O’Reilly and Don Lemon generalized and castigated the black community for violence and bad behavior without the proper socioeconomic narrative that a riot erupted in Huntington Beach California. What is more ironic is that THE Taiwanese Animators behind the infamous Tiger Woods animation, caricatured the riot as a ‘white riot’.  Within the animation they had the statement “A wave of violence hit Huntington Beach Sunday night at the end of the Vans U.S. Open Surfing reminding us that whites can riot too.” The not too subtle message from foreigner’s looking in is evident.

Don Bon, a commenter on the YouTube video had an interesting tidbit. He said, “I like how there’s no racial slurs when it’s whites rioting. If itwas black rioters, the comments would be full of them.” Many believe a double standard in coverage and in persecution of bad acts skews both perception and statistics that have provided cover for Bill O’Reilly and Don Lemon to provide a certain level of skewed truths with a flawed narrative.

Tonight Chris Hayes had a segment intended to be a joke that castigated white violence and behavior as is similarly done when minority youth are involved. It was based on a piece written by Cord Jefferson at gawker.com titled “Video of Violent, Rioting Surfers Shows White Culture of Lawlessness” . In the article Cord writes,

Many people don’t want to hear this kind of tough love, of course. They’d like to bury their heads in the sand and pretend that all white children are as sweet and harmless as Taylor Swift. But the reality is that the statistics tell a different story. For instance, according to research from the Department of Justice, 84 percent of white murder victims are killed by other white people [PDF]. Similarly, white rape victims tend to be raped by other whites [PDF]. White-on-white violence is a menace to white communities across the country, and yet you never hear white leaders like Pastor Joel Osteen, Bill O’Reilly, or Hillary Clinton take a firm stance against the scourge.[source]

MSNBC must have gotten a lot of flak for the piece because inasmuch as at the end of the video Chris Hayes gave a disclaimer, the image at the top of this post was inserted in front of the piece though it was not originally there. Yet, as Chris explains, that is exactly the type of coverage minorities get many times when violence is conducted by one with similar pigmentation.

Here is the Chris Hayes segment.

Chris Hayes commentary immediately after the segment said the following.

If you watched that segment and thought that’s an absolutely ridiculous premise and an absolutely terrible way to talk about millions of people who share nothing, nothing except their general broad pigmentation, you are correct. And remember that the next time you hear those same arguments but with a different word in the place of the word white.

Chris appeal for empathy is commendable. Cord Jefferson congruent language comparison is also commendable. They are both, just like O’Reilly and Lemon, not expanding on a narrative that is necessary to solve the problem. There is a problem with violence. There is a systemic class and race problem. An economic system is marginalizing many leaving them without hope and outlet. Violence is generally an outcome of that irrespective of race. Minorities are disproportionately jailed or given harsher sentencing by the justice system, which has a direct effect on that family’s economy. Minorities still face discrimination in hiring whether for the job proper or wages. This furthers the generational down spiral.

One must hope that systematic analysis on a platform visible to most in an entertaining fashion (TV) is presented soon. One can find valid statistics on the various government data sites to corroborate but most people simply don’t have the time or are not willing to study dry statistics online.