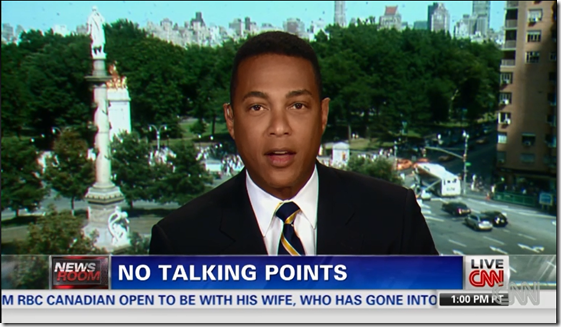 Don Lemon committed that sin on Saturday. He used a truthful rant with an out of context narrative by Fox News’ Bill O’Reilly to justifiably castigate some in the Black community. The problem is that in using Fox News’ Bill O’Reilly, he provided the wrong context. He will become the poster boy for many on the Right who as opposed to looking for the causes of the problem will be punitive in asserting that these problems are self-inflicted.

Don Lemon agreed with the recent Bill O’Reilly’s Talking Points Commentary without expanding that absent the correct context, adds to the problem. O’Reilly said, “The reason there is so much violence and chaos in the black precincts is the disintegration of the African American family. Raised without structure, young black men often reject the education process and gravitate towards vice. Nobody forces them to do that. It is a personal decision.”

While partially true the causes of the disintegration of the African American family is not discussed. Lemon allowed himself to fall into a Right Wing trap that this country has fallen into. It is no different than the Mitt Romney 47% comment. It is not different than telling a truth about how little taxes many pay without stating the fact that depressed wages for most and exploding wages for the top makes that the mathematical reality that has nothing to do with one’s value, worth, or productivity to society.

Don Lemon simplistically says there are five things Black people should think about if interested in fixing the problem; (5) Pull up your pants, (4) Stop using the N word. (3) Respect where you live. (2) Finish school. (1) Stop having out of wedlock babies. Really?

Most because of prevailing culture are more comfortable with the norm of wearing pants above the waist. Most agree that the N-word should really be excised from the vocabulary because of historic hurt it inflicted on many.

Lemon’s assertion about trash is rather baffling and insulting. He sees littering as a racial problem as opposed to the socio-economic problem it is most of the times. Maybe he should visit some middle and upper class black neighborhoods in Houston and other southern cities and some lower class white neighborhoods in Appalachia.

Lemon’s assertion about finishing school is on point. But yet again he fails to take into account poverty and access to higher education. Lemon’s assertion about having out of wedlock babies is also on point. What he fails to acknowledge is that you cannot fix dysfunctions with assertions. You must find the underlying problems. Much of the out of wedlock problems for teens is caused by a lack of education, poverty, lack of options after school, and lack of options in the summers.

There is a lack of investment in people in America. Instead of shallow platitudes, had Lemon used his platform to illustrate that the “black” problem is no different than the Appalachia problem that gets less coverage, he would have done a great service to the American society. He would have used his platform  as a teaching moment to enlighten Americans that these behaviors are socioeconomic and not racial. As the middle class continue its decline the same problems that afflict the black community because it is generally poorer will afflict a large percentage of the white community in the not too distant future.

Lemon has a platform where he could have used Bill O’Reilly’s rant with an intellectually honest narrative. He could have used it to define why O’Reilly’s statements were partially true and where his inferences were wrong. He could have then provided the socio-economic narrative of this cancer spreading to the entire population absent fixes to the basic American economic contract.