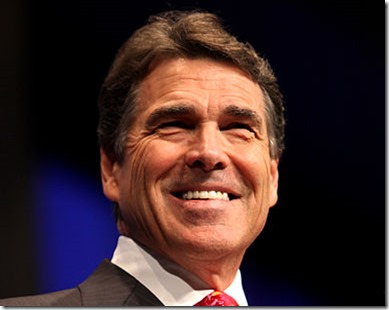 Perry health aides are negotiating with the Obama administration on the terms of an optional Obamacare program that would allow Texas to claim stepped-up Medicaid funding for the care of people with disabilities.

the move comes as a surprise coming from a governor who has insisted he won’t implement the Obamacare reforms, and who slammed Health and Human Services Secretary Kathleen Sebelius for touting the law during a trip to the Lone Star State earlier this month.

“With due respect, the secretary and our president are missing the point: It’s not that Americans don’t understand Obamacare, it’s that we understand it all too well,” Perry said at the time. “In Texas, we’ve been fighting Obamacare from the beginning, refusing to expand a broken Medicaid system and declining to set up a state health insurance exchange.” [Source]

More than 25% of Texas residents are uninsured. No one would believe that in the home of one of the best Medical Centers in the world (Texas Medical Center), that over one quarter of its population do not have insurance and receive substandard medical coverage. It won’t be long before the Texas medical establishment forces the hand of Texas politicians as they lose billions to other states.

The Texas Republican Governor and Legislature have done nothing to solve Texas health insurance problem. They have not offered alternatives to the Medicaid expansion in the Affordable Care Act nor have they done anything to provide incentives to control the cost of health insurance.

The Affordable Care Act will be a marked improvement to the current state of the health insurance market in the United States. In fact in the states that have been proactive in adopting all aspects of Obamacare, it is proving very successful. Instead of running around the country maligning the new law, Perry should stay in Texas and fix its many problems that are undermining the Texas working middle class even as the Texas wealthy do well.